Deprecated: wpcf7_add_shortcode is deprecated since Contact Form 7 version 4.6! Use wpcf7_add_form_tag instead. in /home/travelnewsnamibi/public_html/wp-content/plugins/contact-form-7/includes/functions.php on line 540
 A Namibian community leader of note- Elizabeth Khaxas - Travel News Namibia

Waterberg – a world unto itself

“Break the silence. When you witness violence against women and girls, do not sit back. Act.”

“There is a need for collective human action through active citizenship that critically builds and involves civil society as catalyst for wider action.”

Namibia recently made headlines with its controversial miniskirt issue when hordes of women took to the streets of the capital to protest and stand up for their rights. The topic raised awareness of women’s rights in Namibia, a country that, although being a role model of hope for Africa’s development, still faces major social, political, and economical challenges. Those worst off are women living in rural areas, where they are still largely oppressed and virtually voiceless.

However, a number of formidable people are working concertedly towards creating equal opportunities and improving social conditions for all. One of these is Elizabeth Khaxas, an exceptional community leader who works with women living in remote villages in Namibia, educating them about their rights and strengthening women’s leadership within their society.

A story in photos

“We envision a society in which all women engage actively in shaping the politics, practices and values of both public and private spaces, based on the knowledge of their full human rights as people and as citizens.” In 2004, Elizabeth Khaxas, the former director of Sister Namibia, founded a new feminist organisation, the Women’s Leadership Centre (WLC), which is aimed at building feminist politics from within the different indigenous cultures in the country. The core activity is to support women’s writing and other forms of personal and creative expression as a form of resistance. 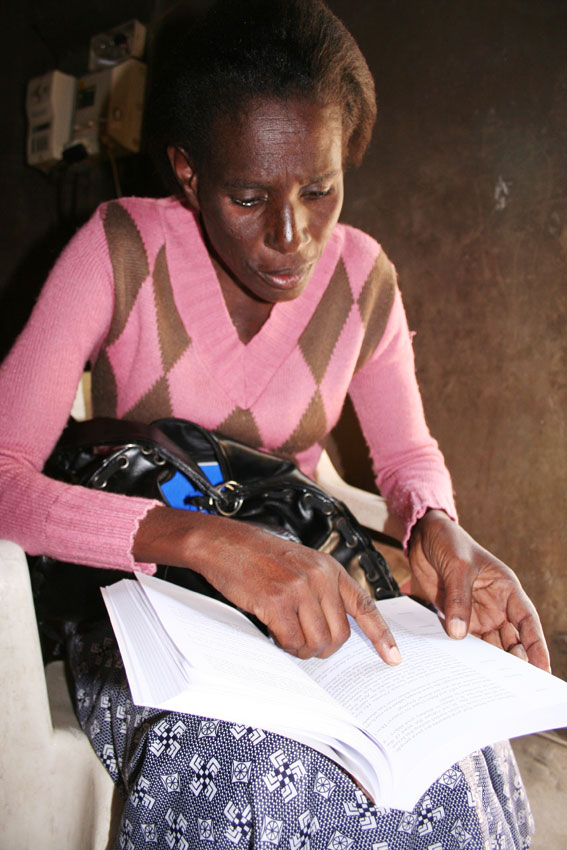 “We are living in a time of great historical opportunity for the achievement of gender equality and indigenous people’s human rights.” The Women’s Voices Project has been the core undertaking of the Women’s Leadership Centre since 2004. Through national and local Women’s Rights and Writing Workshops, many women have learnt about their human rights and related these to their own lives through reflection and discussion. A Caprivi participant reads her published story from the second anthology: We must choose life – Writings by Namibian women on culture, violence, HIV and Aids.

“Being part of the women’s groups in our villages strengthens women to be more open and honest in discussing matters that concern them.” Through the Caprivi for Women’s Rights Project, the Women’s Leadership Centre has taught women in the Caprivi Region about their human rights and provided them with research skills, enabling them to question their culture on issues of gender inequality, violence against women and practices that expose mature women, young women and girls to the risk of HIV and Aids. In 2011 the Women’s Leadership Centre won an award for the Caprivi for Women’s Rights Project at the Gender Links Summit.

“Political parties take note! We, the women of Namibia, are equal citizens! We represent 52% of the vote! We demand implementation of all gender laws and policies now!” Isabella Guriras, headwoman from Tubuses near Spitzkoppe, addresses political party leaders at the Women Claiming Citizenship Public Forum. The Women Claiming Citizenship campaign provides a platform for impoverished and other marginalised women to engage political parties contesting local and national elections through public forums.

The Women’s Leadership Centre started the Building Women’s Rights Leadership among San Women programme in 2012, involving indigenous young Khwe women living in north-eastern Namibia, educating them on their rights as women and as indigenous people, and strengthening their voice, visibility, creative expression and leadership. At the heart of Phase 1 was the Women’s Rights, Oral History and Photography Workshop. “This project can be considered as a model of citizenship and democratic practice in enabling young Khwe women – constituting one of the most marginalised, deprived and excluded sectors of our society – to speak for themselves.”

Extract from Poetry and Photos by Young Khwe Women in Omega:

Only poverty do they know

Only alcohol do they know

Only waiting for men

To give them something

They have forgotten the ways of their grandmothers

The girls of the night

Stop having children as teenagers!