Botanical Garden – Nature’s miracles in the heart of Windhoek

Windhoek – Where Africa and Europe meet

The stapeliads (Stapelieae) belong to the Asclepiadaceae, a large international family with intriguing representatives such as the Malayan Dischidia rafflesiana in which the leaves form pitchers that condense water and the interesting ceropegias that occur in India, tropical Africa and South Africa.

While the stapeliads have a hard core of enthusiasts, they lack general popularity because they are generally unassuming, low-growing plants which produce their beautiful and striking flowers – mostly dark pink, maroon, purple and mauve – only on new growth.

Moreover, their cultivation is not easy. When removed from the dry air of their usually arid habitats they fall prey to the white mealy bug, which sucks up sap from the stems and injures the roots, preparing the way for parasitic fungal invasion. 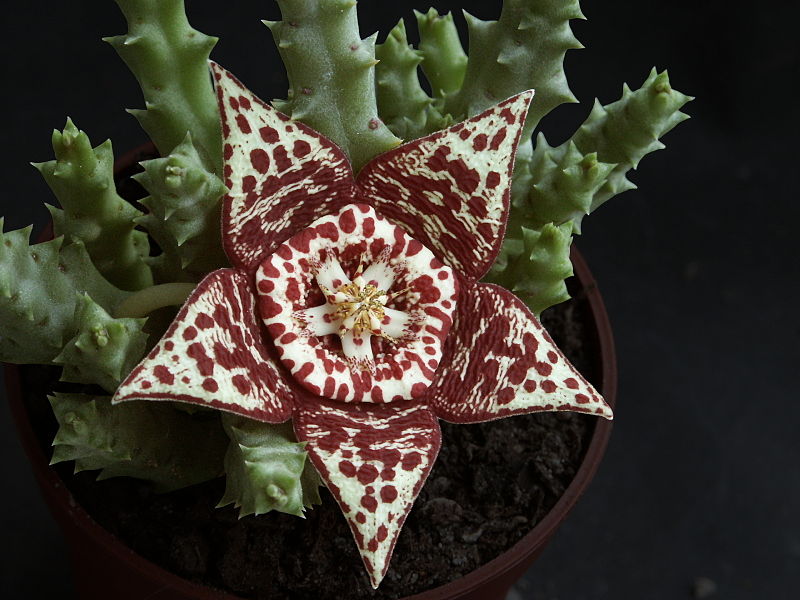 However they are of particular interest to botanists, who regard their flowers among the most beautiful of the dicotyledons, and the most complicated.

The petals that form the corolla are always joined to some extent and all generally have twin seedpods.

There is probably no other succulent on this planet that goes to the same bizarre lengths as the stapeliad to ensure its pollination, and in doing so, it plays a dreadful joke on the pollinator.

The flowers of several species have a particularly obnoxious odour, rather like that of rotting meat.

This, the dark colours, and in some species the vibritile hairs that always move slightly, attract passing flies, which alight to drink nectar.

Female flies, in the belief that the flower is carrion, lay their eggs on it.

Needless to say, when the eggs hatch, they die. However, when jerking itself free from the corona after laying her eggs, the female flies has picked up pollen, which she then carries to other flowers, thereby effecting pollination.

One of Namibia’s best-known stapeliads is the Hoodia, the so-called diet plant that has been used by Southern Africa’s San Bushmen for hundreds of years to dampen their appetites during long treks through the Kalahari Desert.

The British firm Phytofarm has been licensed to develop the plant’s commercial potential as an appetite suppressant.

A genus with species that are very similar to Hoodia is Trichocaulon, a stapeliad with many-angled prickly stems. Like Hoodia, these plants are restricted to Namibia’s arid regions. When not in bloom, the two genera are difficult to distinguish. When flowering, however, Hoodia is unmistakable with its large, showy saucer-like flowers, much like petunias but lacking in the long corolla tube.

The Orbea variegata, a top favourite amongst stapeliad enthusiasts and collectors. With proper care it can be grown successfully in pots and rock gardens, and when happy, will flower. This species grows naturally in South Africa’s south-western Cape from Lambert’s Bay to Mossel Bay, and is especially common on the mountains of the Cape peninsula.

This article appeared in the May/June ‘05 edition of Travel News Namibia.