One of Namibia’s most acclaimed photographers, Paul van Schalkwyk, is currently exhibiting at the gallery of the Franco-Namibian Cultural Centre (FNCC). The exhibition was launched on October 2nd, and will run until 1 November. Diamond giant Namdeb is the main sponsor of the event.

In his own words, Paul said that the “overall theme of this exhibition centres around the importance of preserving the landscape. In Namibia, specifically, that’s very important”.

The show includes high quality aerial photographic prints, video/audio recordings of Paul’s flight missions and textual transcripts detailing research and GPS co-ordinates. Another striking facet of the exhibition are the assemblages from Paul’s airplanes, hung from the ceiling, which add to the narrative of his journey from the air.

The exhibition showcases 10 years of Paul’s quest for pristine land: a chronicle that has ironically thrust him into a dilemma from which he cannot escape.

“The paradox is that I cannot observe and photograph without intruding. Without leaving my mark. It does not matter how careful I am. Even if I succeed to obliterate all evidence of my intrusion, the mere fact that I return with a photograph is proof of my intrusion. I am taking away something and I am also giving something”, he said. 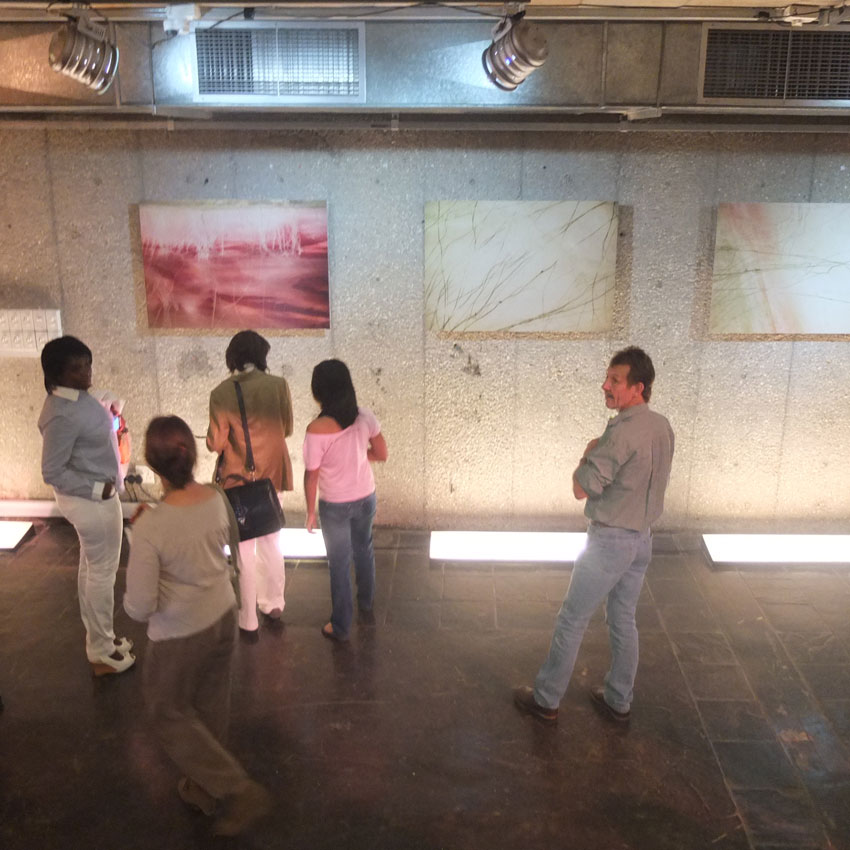 Alexandra Dodd, a critic, writer and editor from South Africa, said during her opening talk at the exhibition that through his work, Paul rendered the familiar unfamiliar, thereby re-awakening in the viewer the value of the earth, the landscapes.

“These photographs of the earth from above are not images of the earth as we know it. From the shifted aerial vantage point, the world seems strange, unfamiliar and mysterious, as if it were another planet – an extra-terrestrial world beyond our ken rather than the familiar earth we know and inhabit on a daily basis”.

For instance, in his photographs documenting the trekking routes of animals across the landscape of Etosha, Dodd notes that at first “I might imagine that they were artist’s sketches on creamy textured paper … It’s only when you step up close and really examine the detail captured in their surfaces, that you see the fine cracks in the baked earth, or animals in the far distance below imprinting their tracks into the vast pale expanse of dust”.

Pauls images, while a form of “sublime mystic abstraction”, nevertheless evoke the reality of the landscape. “In some cases, the earth is so dry it makes you thirsty just to look at it”, Dodd said.

For Dodd, “in capturing Paul’s own very unique and particular aerial vantage point, his photographs are more than just an inanimate, material record of his adventures in flight. Encoded in their surfaces is his desire to share and communicate the epiphanies he has experienced …”.

Overall, Dodd feels that “the real triumph of this exhibition is the capacity of Paul’s images to render our familiar world, strange, abstract and otherwordly, and, in so doing, to wake up our senses so that we are capable of seeing the fragility and complexity of the natural world anew”.