Roughing it for rhinos

THE RMB NAMIBIA RIDE FOR RHINOS

PUSHING THE LIMITS FOR A SPECIES ON THE BRINK

What do you do when something as important as an entire species is standing at the edge of a cliff ready to tumble at any given second? Do you stand by and watch or do you rally, roar, riot, rush, run and ride to save them?

T here are less than 5000 black rhinos left in the world. The Kunene Region of north-western Namibia is home to the largest free-roaming rhino population on earth. The harsh landscape and increase in poaching has placed their survival under imminent threat. With organized crime syndicates causing numbers to dwindle, the protection of these rare and majestic creatures is of crucial importance. They aren’t as tough as their skin makes them seem. They’re not bulletproof or immune to torture. This is their last true stronghold. Their bunker. And it’s under attack.

During the 1970s an increase in poaching and a period of severe drought lead to a steep decline in the desert-adapted species of the region, including the black rhino. As there were no anti-poaching systems in place at the time and conservation efforts in the region were negligible to non-existent, the population of black rhinos reached a drastic and dangerous low. And so, in 1982, in an effort to save the species from the brink of extinction, Save the Rhino Trust (SRT) was created. The trust applied an unconventional but effective method of anti-poaching. They hired the poachers! By employing members of the community who were believed to be at the forefront of the poaching activities and providing them with more secure livelihoods by working as wildlife guards, SRT enjoyed tremendous success. Today, after 30 years of interminable efforts, the black rhino population has rebounded, but the threat has never completely subsided and criminal organisations are once again on the move, back with a vengeance.

At the forefront of this never-ending fight are the SRT rangers, teams of five individuals who track and monitor rhino behaviour and movement and whose presence acts as a poaching deterrent. Five such teams work in shifts of 21 days to cover an area of more than one million hectares, from the northern bank of the Ugab River, all the way to the Kunene River on the border with Angola in the north. An almost impossible task. Rangers are equipped with no more than they can physically carry. Though water and food supplies are replenished every 4-5 days, the rangers must survive the unforgiving climate of Damaraland, with temperatures often reaching way above 40°C, for three weeks on end. Though one of the members of each team is a member of NAMPOL and carries a weapon, the dangers of encountering ruthless armed poachers are all too real. A tough job done by tough men in order to save a vital slice of Namibia’s natural legacy. But why do they have to do it alone?

A CALL TO ACTION

The sun was still low on the horizon as they made their way over a rocky hill. Despite the early hour, temperatures were already reaching the mid-30s and a smouldering day was imminent in this wild corner of the world. They pedalled forth through the October heat, over rock-strewn foothills and thick river sand, back towards the campsite, where they would savour the shade and cold beverages and tend to the scrapes and bruises sustained along the day’s route.

On October 24th, 2015 the group of 20 mountain-biking and conservation enthusiasts set off on a 4-day cycle safari with a crew of 15.
The goal of the tour was to help raise awareness of the struggles faced by SRT in their efforts to protect the black rhino in the Kunene Region as well as to raise funds with which to purchase a new vehicle to use in their rhino protection endeavours. The riders came from all walks of life, different business backgrounds and most had never met before.

95% of the desert subspecies of black rhino known as Diceros bicornis bicornis are found within Namibia’s borders.

Between 1970 and 1992, the black rhino population suffered a 96% decrease, with total numbers dipping as low as around 2,400. Today, thanks to on-going conservation efforts and the wildly successful Rhino Custodian Programme established by the Ministry of Environment and Tourism, the species has been saved from near extinction.

The RMB Namibia Ride for Rhinos cycle tour was the culmination of months of planning and hard work and the collaboration of like-minded proudly Namibian companies, who each recognised the need for action from community members who are not normally involved in conservation activities. The idea for the ride was the brainchild of the team at Venture Publications and came from the realisation that, though we have been partnering with Save the Rhino Trust through our magazines for more than 20 years, we had never been able to assist in any tangible way except writing about them and creating awareness. Something needed to be done to rally the right group of people – people who had influence in Namibian society, people who had access to resources and were willing to help bring about change. We knew we weren’t going to be able to do it alone and contacted the leaders in each field. Logistical assistance was supplied by Wilderness Safaris, who manage the concession area. They supplied vehicles and guides, and set up a rugged bush camp in what seemed like the middle of nowhere. With a fantastic financial contribution that covered tour costs, RMB Namibia jumped on board as the tour’s name sponsor. CYMOT Namibia contributed cycling products, T-shirts and technical MTB support. Dr Werner du Plessis joined to tend to bumps and bruises and last, but certainly not least, were Miguel and Samuel, our two extraordinary chefs from Namibia Exclusive, who forever changed our perceptions of what can and can’t be cooked on an open fire in the middle of the wilderness.

A FEAST OF A TIME

Venison steak with red wine sauce, dark chocolate mousse, lamb on the spit, crème brulée, a whole lot of different potatoes and the cherry on top: Chef Miguel’s torta frita, or fried cake. As impossible as it may seem, two men in pristine chef’s whites, toque and all, made these dishes, and many more, on a braai in the middle of the bush. Paired with wines from Rust en Vrede, Guardian Peak, Neuras and Beyerskloof and some exceptionally good company around the campfire meant each evening at the Ride for Rhinos camp was truly special.

Days spent on the mountain-bike, over rough terrain and technically difficult tracks, yielded passionate discussion from the riders each evening. The landscape was stunningly beautiful, the nature pristine and their saddleback safari through the Damaraland wilderness was a life-changing experience. Elephant, zebra and gemsbok made for wonderful companions along the routes. Each water stop, or rather Windhoek Lager stop, turned into animated debates on who fell where and how hard or who spent more time pushing their bike than on the actual saddle. When they weren’t on their bikes, laughter was the only sound that interrupted the serene landscape, replaced by some loud snores from one or two tents late at night…

WHITE OR BLACK? WHAT IS THE DIFFERENCE BETWEEN A WHITE AND BLACK RHINO:

There are only four northern white rhinos left in the world, only one of which is male. This male is unfortunately past its reproductive age. Is this the end of a species?

*Since publication one of the last 4 remaining northern white rhinos has sadly died. 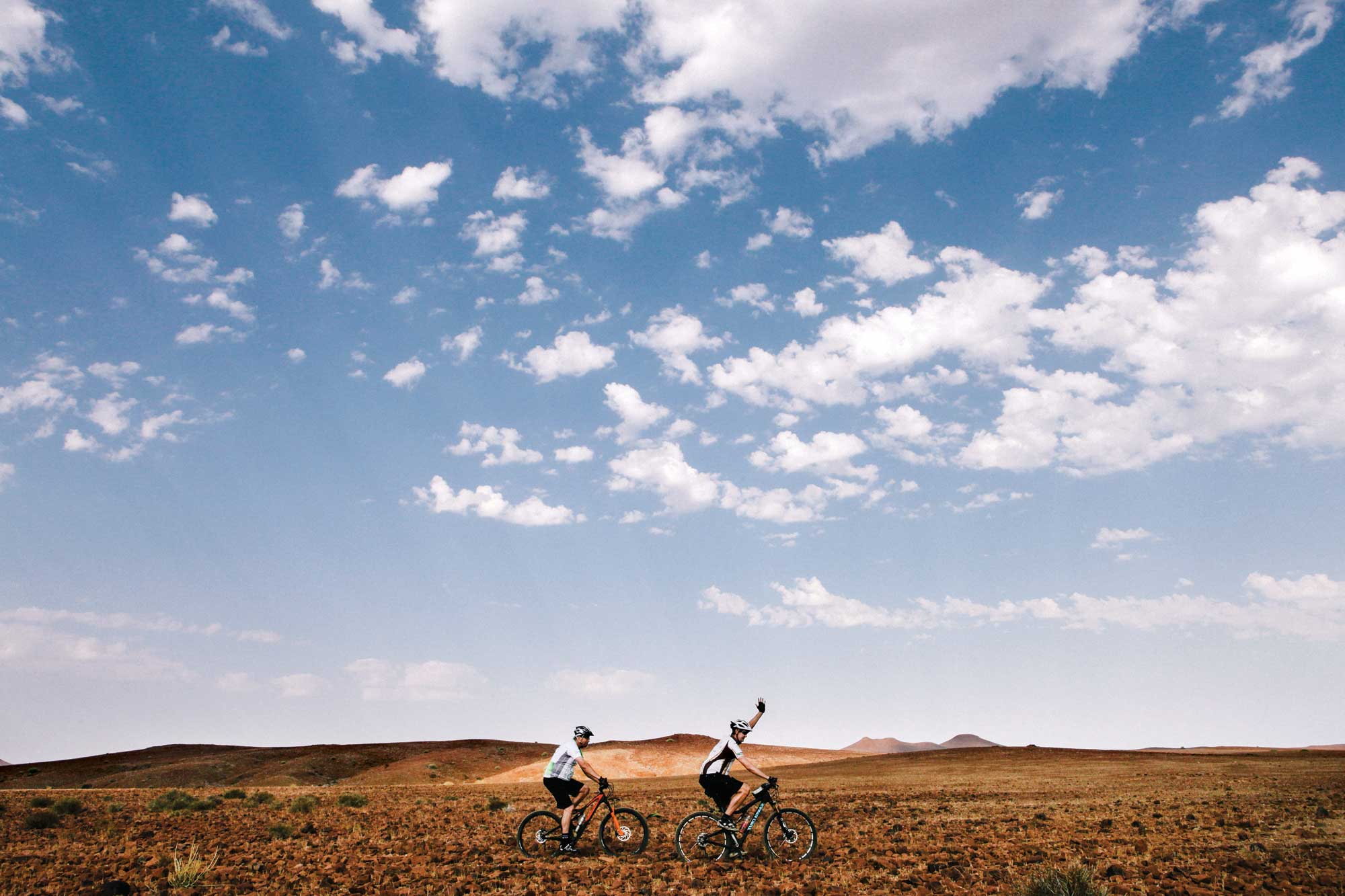 At night, when the dust, and sometimes blood, of the day’s adventures had been washed off, the group was joined by the most important members of the initiative, the SRT rangers. Around the soft glow of the campfire they told us of their adventures, and misadventures, and also of their reality. They told of 21 days spent in the harsh Namibian sun, following these prehistoric creatures and keeping track of where their spoor crossed with that of an intruder’s. These campfire talks unveiled the truth. They unveiled facts and figures and harsh realities of community involvement in the poaching syndicates and a fight that sometimes seems futile. When your terrain is inaccessible and your community unreliable, the task comes to seem impossible.

The men and women sitting around the campfire listening intently had spent four days exerting themselves through this rough and rugged terrain. They now understood the difficulty first-hand, and it wasn’t long before the first promise of aid was made, with many more the follow. If the idea of the tour was to immerse ourselves completely, and to simulate what these rangers have to endure on a daily basis, I think we succeeded. After four days of pedalling through the searing heat, camping in the dust and altogether roughing it for rhinos, we understood the tremendous task at hand.

“Never be daunted”, said Ernest Hemingway in his classic The Sun Also Rises. He must surely have been speaking of rhinos and not Spanish bulls, imploring the world not to give up hope. Because one thing is for sure, the task is certainly daunting. So where do you start? Do you educate the masses on the true medicinal quality of rhino horn, explaining that it is no different than chewing your own fingernails? Do you get the army and legal system involved and throw money towards arrests, rewards and prosecution? Do you back the school of thought rallying for the legalization of rhino horn? Or do you do your best to help the dedicated individuals working day and night in the field to deter the poaching epidemic? No matter what our approach, action needs to be taken. The sun will one day rise on a society that works together to protect its natural resources and sees the worth in its pristine beauty. Until that day, each individual willing and able must be prepared to rough it for the cause… they won’t make it without you.

The description white rhino is the result of a linguistic error in which the original Afrikaans name for the subspecies was wyd-lip renoster aka wide-lipped rhino. The Afrikaans wyd sounding similar to the English word “white” caused this lost-in-translation animal to be named the white rhino. Accordingly, its counterpart was named the black rhino. Their names have nothing to do with their colour.

Chefs Miguel and Samuel demonstrate that there is no limit to the extravagant possibilities on the menu, even in the bush…

Save the Rhinos Trust’s new ride: a Toyota Land Cruiser to aid in their rhino protection initiatives.

The RMB Namibia Ride for Rhinos is set to be an annual event in aid of the Save the Rhino Trust.

For more information on or to contribute to this amazing initiative visit www.rideforrhinos.com.na

VENTURE PUBLICATIONS would like to thank the tour’s main sponsor, RMB Namibia, for supporting this amazing initiative. Without their generous contributions and continued support, this tour would never have been realised.

Tour dates for the 2016 RMB Namibia Ride for Rhinos will be released shortly.