Swakara – The black diamond of the Namib Desert

Celebrating the past and inspiring the future

What materials were used to create them? Where were they woven and what were their traditional uses? These are just some of the questions African baskets inspire.

Whether decorating the walls of upmarket safari lodges, filled with grain in a traditional homestead, or stacked high in craft shops throughout Namibia, African baskets are a combination of art and function, in which traditional skills and indigenous materials are blended to create beautiful, useful objects. Turned by hand and examined with an inquiring eye, baskets reveal detailed patterns, textures and colours. But their history is little known.

With the publication of African Basketry – Grassroots Art from Southern Africa by Anthony B Cunningham and M Elizabeth Terry, answers to many of these questions are finally accessible. This notable and beautifully illustrated book explores the history, artistry and future of basketry in Southern Africa.

Terry, whose PhD research examined the economic, social and cultural significance of Botswana’s craft industry compared to other small-scale enterprises, teamed with Cunningham, an ethno-ecologist who has been investigating the sustainability of resource management in crafting, for the project. It became a twenty-year journey as the two authors travelled independently from African deserts, swamps and settlements into the lairs of museums on three continents, documenting the diversity of baskets from Southern Africa.

“Wherever Tony or I travelled, we visited museums which house collections of baskets from Southern Africa. We went, among others, to the National Museum of Namibia in Windhoek, the South African Museum in Cape Town, the British Museum of Mankind (now part of the British Museum) in London, the Smithsonian Institution Natural History Museum in Washington DC, the Chicago Field Museum of Natural History and the Seattle Art Museum, The latter had a collection of 1970s baskets from Botswana, which was a most unexpected find,” recalls Terry. 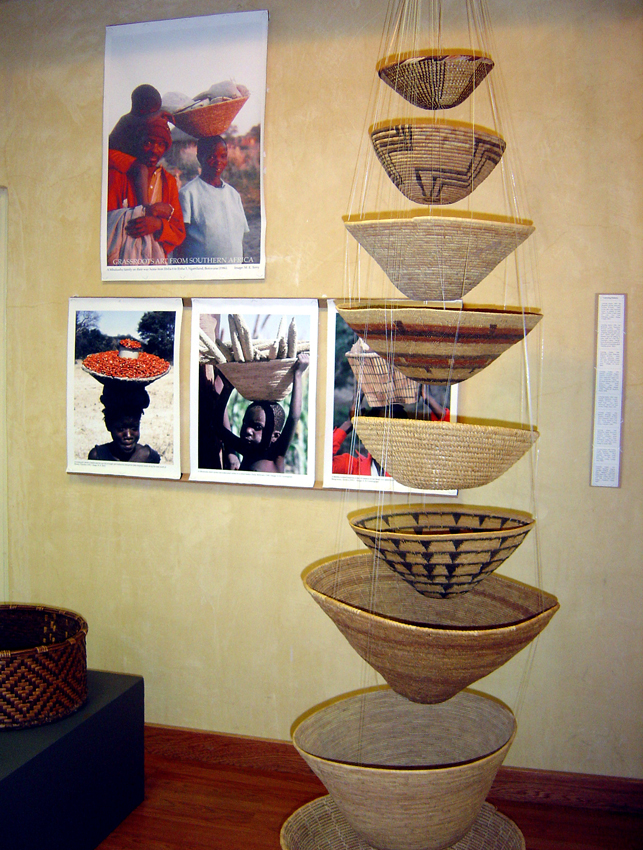 After identifying items they wanted to see from a catalogue, they were invited to look for the baskets in the different museum stores. “It was like being a kid in a candy shop,” laughed Terry. Donning white cotton gloves before handling the rare, antique baskets, the search was enlightening. “The museum searches helped us see how old applications and artistry had been transferred to modern uses, execution and materials.”

Citing historical and contemporary examples of basketry from Botswana, Lesotho, Mozambique, Namibia, South Africa, Swaziland, western Zambia, and Zimbabwe, the authors delve into how the traditional uses of baskets reflect the lifestyles of the hunter-gathers, pastoralists, fishing communities and agriculturists who made them. This comprehensive book also explores the materials used in creating baskets, the art and skill of weaving, and the benefits to basket makers.

While the museum searches proved fruitful, most of the research for the book was done in the field, where Terry feels very much at home. After studying in the US, working with women’s craft groups in Chad and spending more than a decade working in craft development in Botswana, Terry, a resident of Windhoek since 1993, has conducted over 50 training courses to help basket makers reach higher standards. “Over the past 15 years I’ve helped train more than 1 000 women, focusing on the best weavers in a village, who in turn train others,” says Terry. “Part of my responsibility was to identify what the market wants, pass this information on to the women and then allow them to craft the product.”

In Namibia, two types of baskets are examples of how market-driven basketry has become. One uniquely Namibian basket was cleverly marketed to reach a larger audience, while the making of another basket was resurrected due to market demands.

During the 1960s and 1970s, large coiled palm baskets with lids from northern Namibia were transported to Windhoek and then to South Africa, where they were traded door to door as laundry baskets. Instead of selling the baskets for cash, they were traded for used clothes, which in turn were transported back to Namibia and sold. They found that they could earn more money this way than by selling the baskets directly.

Nowadays laundry baskets are sold at craft shops and roadside stands and can be found in homes throughout Namibia and South Africa. By expanding the market for this type of basket, women in the north continued to weave, entrepreneurial spirit was evoked, and the weaving tradition was kept alive through economic incentive.

In West Caprivi, the Kxoé San traditionally used a gathering basket for collecting wild fruits and storing dry food. “These baskets are unique in that the San aren’t known for their baskets, as they didn’t typically carry bulky possessions with them,” says Terry. “But this is something they used and, in their hunter-gather lifestyle, they could move with it.”

However, in recent times plastic bags replaced these baskets, there were few to be found and none being made. Annie Symonds, a craft consultant working in the region, met a weaver who remembered how to make them. This weaver taught others and now the Kxoé weavers can’t keep up with the demand for these beautiful, useful baskets.

“Except for baskets like those used for fishing, winnowing and straining beer, which can’t be replaced with plastic or enamel containers, this art form would have vanished if it hadn’t been for their commercial viability,” stresses Terry.

With a growing commercial market, demands placed on basket weavers have also increased. “There is a need to educate tourists in terms of the time and effort it takes to make a premium basket, so that prices are fair, they don’t try to bargain them down, and the point is emphasised that quality matters.”

Given that materials must be collected from the field, prepared and then woven, it can take from two weeks to a month to produce a medium-sized, bowl-shaped, coiled basket. This is a fact worth remembering, especially by those inclined to haggle over the price of a basket at a roadside stand.

Pieces of art that have been crafted by hand, baskets also provide a cultural link from the past to the future. In their beautiful and thoughtful book, African Basketry – Grassroots Art from Southern Africa, Cunningham and Terry capture the techniques, history and spirit of this rich art form, celebrating the past and providing inspiration for basketry in future years.

This article was originally published in the June 2007 Flamingo magazine.