The carmine bee-eaters of Kalizo

On 22 August, give or take a day or two, the carmines arrive in their thousands to do their annual breeding thing at Kalizo. With great expectation and anticipation, Kalizo is on fire for this incredible happening every year. However, like in-laws, their departure is not that predictable, taking place from early November until late December. From here, they disperse throughout northern Namibia, and in early autumn they assemble to return for their third and final movement of the season back to central Africa, although a few birds remain in the area during winter. 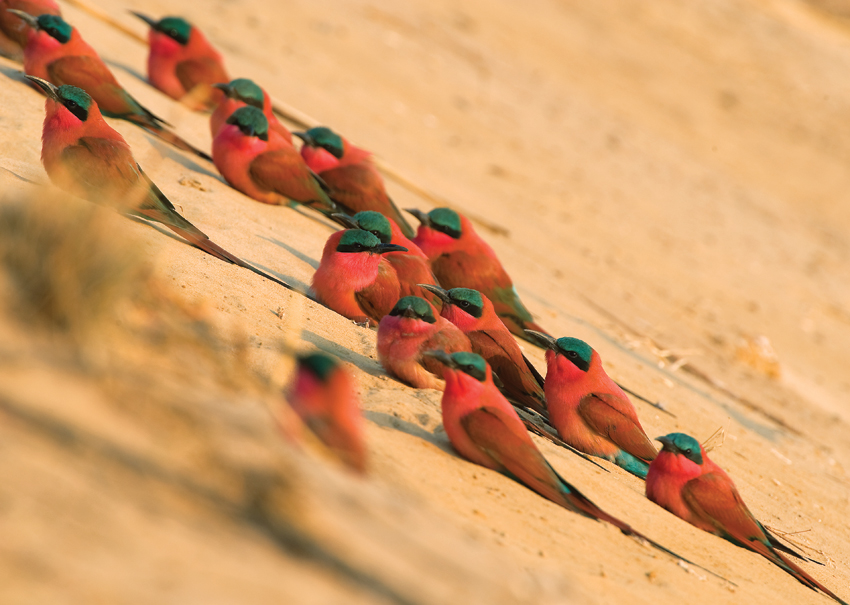 The Southern Carmine Bee-eaters are indeed a unique group of birds. According to the owners Danny and Val, Kalizo is one of the largest breeding sites of carmines in Africa (between two and five thousand birds), and, for that matter, in the world. In a book written in the early seventies, W Nichol mentions that he visited a breeding colony on the banks of the Umfuli River near Harare in the then Rhodesia.

According to him, there were more than seven thousand nests.

Unfortunately, soon after his visit, the bank collapsed and the colony dispersed into smaller colonies. In Namibia, except for this very large colony at Kalizo, there are also colonies on the Okavango River at Shamvura and in the Bwabwata Game Park on the banks of the Kwando River.

One of the most interesting factors about carmines is their gregarious communal breeding. The same site is used annually, although new tunnels are dug each year. The nest is either in the face of the bank of the river, which is slightly inclined to prevent water from entering, or on top of the bank. The nesting chamber is separated from the tunnel by a small lip, preventing the eggs from rolling out.

The nests on top of the embankment have a much longer tunnel, probably an anti-predator invention. I could never figure out which of the carmines built their nests on the flats and which have their villas with a view over the river.

I suppose the more affluent carmines stay in the villas while the poverty-stricken members of the population stay on the flats. What was obvious to me was that renovations (removing sand from the entrances to the nest), were a much more prominent activity on the flats than in the villas, for obvious reasons.

Whether this phenomenon of building the nests on the flats is a consequence of previous incidents where the nests in the wall were damaged by floods, is uncertain, but this could well be an evolutionary development. The nests become soiled by faeces and regurgitation (even the nests of the privileged), a rather smelly and repulsive situation, but this might also serve an anti-predator purpose.

There are nine bee-eater species in Africa, seven of them occurring in Namibia, of which the carmine is the largest. There is a carmine subspecies in northern Africa, the Merops nubicus, which differs from our local Merops nubicoides in its turquoise throat. Like all other bee-eaters, the carmine has a decurved bill, allowing unobstructed sight of its prey until the point of capture.

The carmine’s prey consists mainly of aerial insects. In three different studies it was found that their diet differs, depending on location. In Nigeria it consists of flying ants, in Zimbabwe of honeybees and in Mali of locusts and grasshoppers. The common denominator was flying insects. At Kalizo, their diet consists mainly of cicadas, dragonflies and grasshoppers. They have very rudimentary feet and short legs, but their wings are pointed and the tail is long and dexterous. This enables a very fast and highly manoeuvrable flight, which is important for their hunting style. After they have caught their prey, they either devour it in flight or return to a perch where the prey is squeezed or rubbed on a branch to remove the venom and sting.

The carmines are actively associated with other animals, birds and even humans to facilitate their hunting. My first encounter with carmines was on the Bokomo box of Weetbix way back in the sixties, where a picture of a Kori Bustard (Ardeotis kori), depicted a carmine sitting on its back. Although I have never seen this, I do believe that this is one of their favourite ‘beaters’, as they are called. Other disturbers or beaters are domestic animals, elephants, antelopes, zebras and even vehicles.

Danny and Val have started a master plan to protect this colony at Kalizo from predators, but as one can imagine, this will cost money and funds are urgently in need. Why then the fuss? Are they so vulnerable? Indeed, they might become endangered because of preventable factors. Their ‘traditional’ predators are snakes, water monitors, rats, mongooses and the ever-lurking Yellow-billed Kites (Milvus aegyptius).

While watching the carmines at their colony for an extended period, a Yellow-billed Kite did a hunt over the area at least every 30 minutes and its efforts were usually quite successful. Interestingly, the visits by a water monitor elicited much more aggression from the carmines, although this was also in vain, because the monitor emerged from the nest with its victim. Unfortunately, their main threat is humans. On various occasions humans have been caught excavating the nests for birds (mostly done with fishing nets) and eggs. The effect and the impact of this are, as one can imagine, much more devastating than the odd few birds taken out by traditional predators.