As you travel along the B8 from Grootfontein towards Rundu, the trees on the roadside become increasingly taller and more diverse. This is so because rainfall in Namibia increases from almost nothing in the far south-west to around 600 millimetres per annum in the north-east.

The largest trees along the first 50 kilometres or so are the marula (Sclerocarya birrea), recognised by their typically mottled, straight greyish trunks and large spreading crowns standing out above the surrounding bush. The lay-bys along this road are often constructed in their shade. Marula trees are highly valued for their almost round, plum-like fruit, which turn pale yellow when ripe. 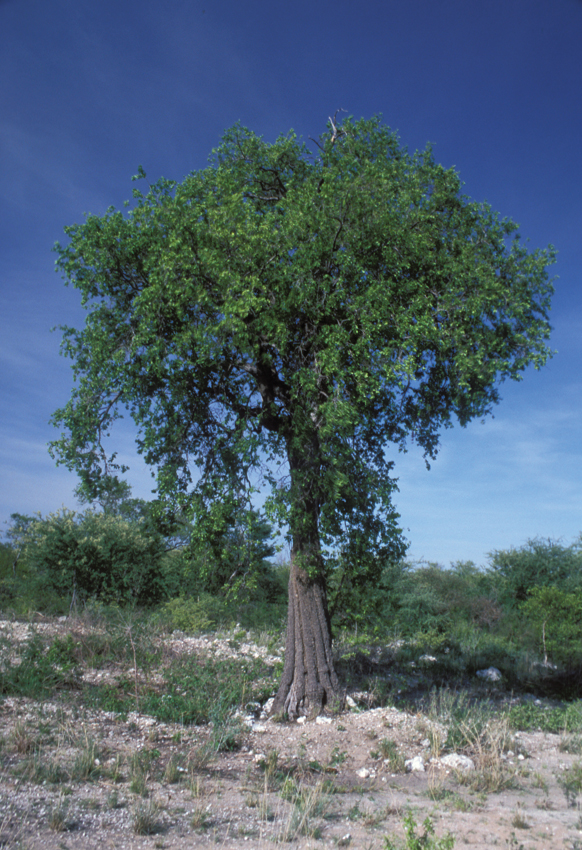 The flesh of the fruit is deliciously aromatic, very nutritious and rich in vitamin C. It is eaten fresh, made into an invigorating beverage or wine and can be distilled to make brandy. It also makes a delightfully tangy jelly. The seed has three chambers, each with a little ‘lid’ that is forced outwards as the seed germinates. In a very wet year you can find these seeds where they have germinated under the tree before being covered by soil. Marula fruits form the basis of an extensive home industry. Rural women collect them and after using the flesh of the fruit, carefully crack the nut open to extract the kernels, which contain a rich nutritious oil. The oil is used for cooking, dressing hides and leather and cosmetics. As such it is sold in many souvenir outlets. Raw meat rubbed with marula oil is said to keep fresh for a long time.

Quite close to Grootfontein you will notice a single specimen of the indigenous makalani palm (Hyphaene petersiana). About 50 kilometres further the highway passes through large stands of these palms, providing a distinctive character to the landscape. This is another tree that is of great economic value to the local communities, as the young, unopened leaves, separated into fibrous strings, are made into the beautiful basketware found in souvenir shops and street markets thoughout Namibia.

The fibres are dyed by boiling them for a whole day with the roots of the gwarrie bush (Euclea divinorum), thus attaining the dark brown colour, and with the roots of the bird plum (Berchemia discolor) for the reddish colour. The baskets have many uses as containers. A particularly closely woven type is used for beer. When filled with liquid, the fibres swell, making the sides and bottom almost impervious to the fluid but letting through sufficient moisture to the outer surface to allow the contents to be cooled by evaporation.

Female makalani palms bear fruit roughly the size of a tennis ball. The fruit takes two years to mature and another two years to drop from the tree. The sweet palatable pulp below the hard outer shell is relished by the local people as well as by elephants and baboons, and can also be fermented into an alcoholic beverage. A fibrous layer encloses the hard inner kernel. The seeds resemble ‘vegetable ivory’ and are carved into various decorative articles that are sold to tourists. Makalani palms are quite impervious to veldfires, which may explain why you find pure stands of these trees in certain areas. Moreover, burning stimulates the seeds to germinate.

The sap of the makalani palm is tapped and utilised as a beverage. Initially it is very refreshing, tasting rather like ginger beer, and slightly intoxicating, but after a day or two it starts to ferment and with sugar added can become quite strong. To tap the sap the brushwood and suckers around the base of the stem are burnt, causing the sap to rise more rapidly. Cuts are then made into the vegetative tip of the stem and leaf blades are inserted to channel the sap into containers attached to the trunk.

A mature palm tree can provide about 60 litres of this sap, but unfortunately does not survive when tapped more than twice. Occasionally you find a palm trunk with wooden pegs inserted, providing a ladder for people to climb up to the growth point to tap the sap.

Another large tree common in the reserve along the road to Rundu is the tamboti (Spyrostachys africana). It has drooping dark-green foliage that turns copper in spring, dark green in summer and a beautiful dark red in autumn. The distinctive rough dark bark on the straight trunk splits into rectangular pieces. Being a member of the Euphorbia family, the tamboti has an extremely poisonous white latex that burns the skin and causes blisters. It is especially painful in the eyes and can cause blindness. Hunter-gatherers in the past used this sap to poison their arrows. At the same time the sap protects the wood from being attacked by insects.

In former days tamboti poles were used as mine props and fencing poles. Large numbers of trees were cut down for this purpose. Nowadays the tree is protected by forestry legislation. Due to the poisonous sap, tamboti wood should not be used as firewood, as the smoke causes headaches and nausea. Meat grilled over this wood is unpalatable and can also cause nausea.

Antelope calves, when suffering from diarrhoea, have been observed chewing a few tamboti leaves and then recovering. The steam of boiling tamboti roots is said to cure eye diseases, stomach ulcers and to keep maggots away from injuries sustained by cattle. The dried pulverised bark is made into a skin ointment for babies.

Tamboti wood is pleasantly scented – thus the English name, African sandalwood. The dark-brown, very heavy heartwood is difficult to work but very durable and can be polished to a beautiful sheen. The Herero sprinkle finely pulverised leaves and twigs over glowing embers and hang their clothes in the resulting aromatic smoke. They rub the pulverised wood mixed with fat into the hair as perfume. Scented beads are carved from the dark heartwood and made into necklaces that can be bought at souvenir outlets. Slivers of tamboti wood placed among clothing are said so keep away insects. The fruits of the tamboti are often stung by a small grey moth whose larvae tend to move in a jerking fashion, causing the seeds to jump into the air up to 30 centimetres high, giving rise to the name ‘jumping-bean tree’.