Deprecated: wpcf7_add_shortcode is deprecated since Contact Form 7 version 4.6! Use wpcf7_add_form_tag instead. in /home/travelnewsnamibi/public_html/wp-content/plugins/contact-form-7/includes/functions.php on line 540
 Trees for Travellers - Predatory trees, hooks and pricks - Travel News Namibia

Brandberg hike: You need a permit

For tree lovers a trip in northern Namibia along the B8 is particularly rewarding, especially the stretch between Grootfontein and Rundu.

Soon after leaving the last hills behind, about 230 kilometres south of Rundu, the road passes a tall red and white ‘Switch Tower’, a structure that enables rural Namibians to maintain wireless telephone contact.

Some of the tallest trees in the vicinity of the Switch Tower are umbrella thorn trees (Acacia tortilis subsp heteracantha). Their spirally contorted pods are diagnostic and gave rise to the botanical name ‘tortilis’. Produced in abundance, the pods are very nutritious and are eaten by game and stock. Some often remain on the tree or can be found in the forks of its branches to give away the identity of the tree.

Umbrella trees have straight white thorns growing in pairs, as well as short hooked thorns in pairs, hence the Afrikaans name ‘haak en steek’, meaning ‘hook and prick’. They even have pairs of one hooked and one straight white thorn. In general, young acacias often have much larger and many more thorns than mature acacias.

Around Christmas the umbrella thorn trees are smothered in millions of small, delicately scented, creamy flower balls that  may appear more than once in a season. Umbrella thorn trees could be confused with the Kalahari acacia (Acacia luederitzii), which is also quite common along the B8 but has larger flowers and straight pods. San hunters fashion quivers out of the root of this tree by heating it over a fire, after which the bark easily slips off. A piece of skin is then tied over one end of the resultant tube, while the other end is secured by wild cotton or a hare’s tail to protect the arrows.

For any tree lover a visit to Roy’s Camp, about 50 km north of Grootfontein along the B8, is a must.

In addition to ingeniously constructed rustic bungalows and delicious meals, there are camping sites under trees, and above all an interesting hiking trail. Most impressive among the trees are a couple of tall tambotis (Spirostachys africana), whose dark rough trunks are slowly being enveloped by the light grey to almost white roots of the strangler fig (Ficus burkei, formerly F. thonningii).

After germinating in the fork of a tree, these seedlings send down dangling red aerial roots. Over time these roots reach the soil and anchor themselves. Gradually they turn white and flatten out until they eventually envelop the entire tree. For some years you can see the bark and foliage of both trees, until eventually the remains of the host die off.

At the camping area at Roy’s Camp there is a large specimen of the Transvaal saffron (Eleaodendron transvaalense, formerly Cassine transvaalense), a tree fairly wide-spread in the northern mountainous parts of Namibia but never common. In shape it is often similar to the shepherd’s tree (Boscia albitrunca) and its pale grey branches are almost always visible through its foliage. The grey, fairly smooth bark of older trees often has characteristic rough darker patches.

The simple leaves are dark green to grey green and shiny and mostly clustered on short twigs. Leaves on fresh growth often have a serrated margin. The tree is almost evergreen and thus easy to identify in the dry season. Livestock and game browse on its leaves. In Kaokoland a decoction of the bark is used to treat skin diseases, while the Himba chew the leaves and swallow the juice to ease a sore throat. Locals along the Okavango River drink an infusion made from the leaves to counteract poisoning, as this induces vomiting. The wood is shaped into small utensils such as spoons (hence the Afrikaans name ‘lepelhout’, meaning ‘spoon-wood’), pipes and drinking troughs.

Having passed a large stand of makalani palms (Hyphaene petersiana), we reach the first of many transverse dunes, which in days before tarmac made progress along this road extremely slow, a trip from Windhoek to Rundu often taking two days or more. Here we notice tall single-stemmed trees with umbrella-shaped canopies, which in the dry season seem to be decorated with large round discs reflecting the sun.

Referred to as Transvaal teak or wild teak, and ‘dolfhout’ or ‘kiaat’ in Afrikaans, this tree is one of only a few species in Namibia suitable for making furniture. Most of the reddish brown wooden bowls sold at woodcutters’ markets are made of this wood, and are often conspicuous due to streaks of the lighter sapwood. These trees are a wonderful sight in spring when covered in hanging sprays of bright yellow flowers. The large compound leaves consisting of many shiny dark-green leaflets appear after the flowers.

The distinctive pod consists of a central round seed case, covered in long stiff bristles and surrounded by a flat papery wing. In Silozi this tree is known as ‘mukwa’, the root of the name Mukwe, a place in western Caprivi. The scientific name Pterocarpus refers to the winged fruit. This species is confined to deep sandy soils in north-eastern Namibia, spreading into Angola and beyond, hence the specific name angolensis.

Another large tree found on the dunes is the sand seringa (Burkea africana), locally known as ‘omutundungu’. The rust-brown woolly-velvety covering of its young branches and growth points is diagnostic. Its twice-compound leaves are blue-green with a prominent midrib below.

A tree with a large spreading crown protruding far above the surrounding bush is the marula (Sclerocarya birrea), which has compound leaves and yellow flowers. Still south of the veterinary control post we find the variable bushwillow (Combretum collinum), which in Namibia occurs almost exclusively on sandy soils. It may be a large shrub or a tree with a rounded crown that often reaches almost to the ground and can reach a height of 10 to 15 metres. Its leathery leaves are usually distinctly longer than wide but exceedingly variable in shape. 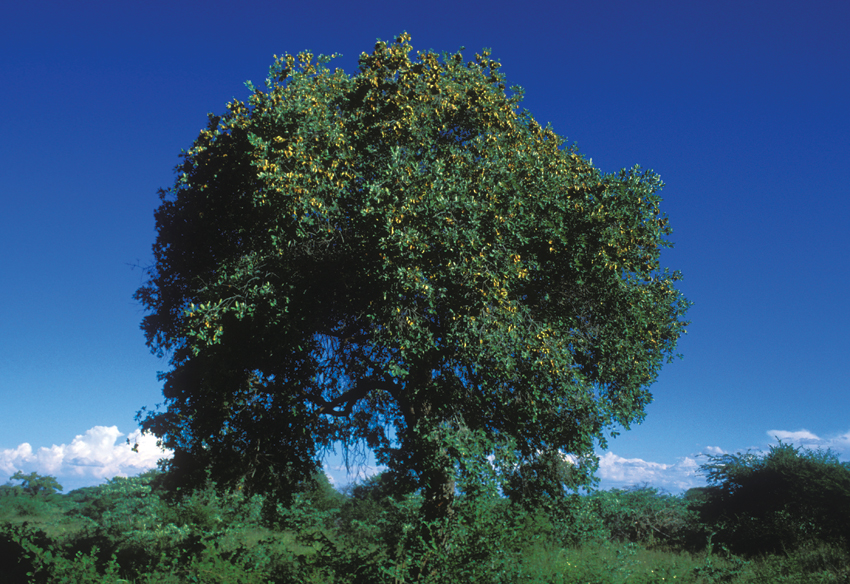 The most diagnostic feature is the dark brownish-pink and fairly large fruit, four-winged like those of so many of the Namibian Combretum species. (So should you find other shrubs or trees with four-winged fruit on your travels and have access to a tree book, try to find them under Combretum.) The leaves are browsed by game, while the Kwanyama people chew or stamp the root and boil it to prepare a cough remedy.