A black and white portrait of Namibia

Rimmer, who was shortlisted for the 2011 and 2012 Black & White Photographer of the Year award for his photographs depicting African people and wildlife photographs.

During his 7 week stay he visited Etosha Pan and later travelled up into the Kaokoveld.

‘I have travelled to Namibia many times in recent years,’ says Rimmer, ‘I’m always struck by the stark beauty of the place, the genuine friendliness of the people and of course, the fantastic roads which are the exception rather than the rule in Africa, let me tell you! The quality of light is like nowhere else on Earth. It really is a photographer’s paradise”

For him his photographs serve a purpose. “When I photograph wildlife I attempt to convey the sentient nature of the subject, their emotions being worthy of our consideration and thus emphasizing the precarious circumstances of their existence”, he says.

Rimmer’s photographic journey during the past few years has been deeply interwoven and motivated by a brush with cancer.

To him, his photographs represent a visual documentation of the world he experienced when he returned to southern Africa following his recovery from cancer in 2009.

A longing for the landscapes and wildlife that shaped his youth was ignited and a mere five weeks after completing a course of chemotherapy he rented a Land Rover in Windhoek and headed out alone into the vast and pristine south-western Namibian wilderness in an attempt to heal his spirit.

He said that his desire to be in the bush was one way he chose to soothe his mind and body and to regain strength “after some dark days following my diagnosis”.

His portraits of the semi-nomadic Himba in Damaraland in Namibia drew some public attention, leading to Facebook shutting down his page in 2010.

However, in these photos Christopher was able to capture the proud, exquisitely featured women of the Himba people, who have honoured their traditions despite Western sentiments that their bare-breasts are offensive in modern civilization.

“I don’t deliberately attempt to place these people in the past”, Rimmer said. “But there is a sense of nostalgia in the way I have constructed the portraits of them and this relates more to my own sense of time rapidly passing and the piece of myself I left in Africa following my departure in 1981”.

Rimmer’s photographs capture the Himbas continued struggle to balance and honour their traditions and at the same time to adapt to the inevitable encroachment of western culture.

“I have included some of the modern elements that are beginning to appear in their lives. In one portrait for instance a Himba headman carries an MP3 player and wears a combination of traditional and modern clothing, yet he appears more connected to the past than the future”

Rimmer, who was a guest of Namibia Wildlife Resorts  during his recent visit to Namibia at Etosha’s Boulders Camp said the park remains an inspiration.

“Waking up in the early dawn light and seeing those amazing wild plains stretching as far as the eye can see was unforgettable”.

Rimmer has a busy year ahead of him but plans to return to Namibia in August for more location work.

Some of the photographs he has taken will be exhibited at the Manton Festival in France.

In November one of his most famous photographs of a Himba woman will be projected onto a giant screen at the Montier en Der Festival, also in France.

His work is not only artistic, but also a tool for conservation efforts in southern Africa.

His photographs manage to stimulate an emotional connection with his viewers.

“When we are emotionally connected we care”. 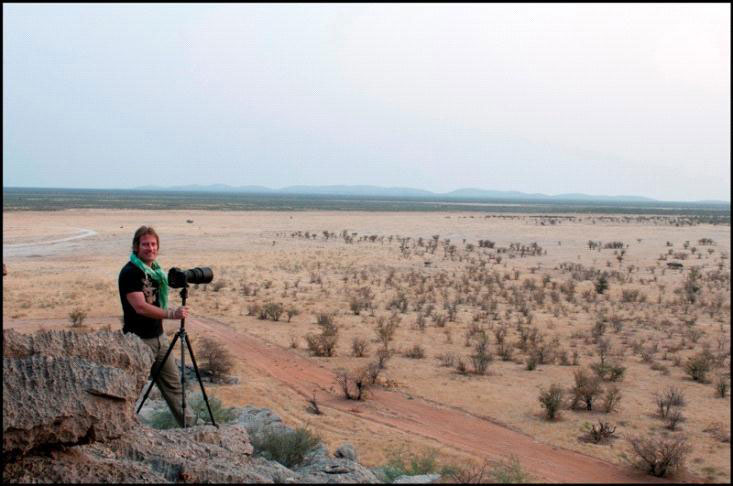