Deprecated: wpcf7_add_shortcode is deprecated since Contact Form 7 version 4.6! Use wpcf7_add_form_tag instead. in /home/travelnewsnamibi/public_html/wp-content/plugins/contact-form-7/includes/functions.php on line 540
 Namibia in autumn - Visiting your favourite holiday destinations - Travel News Namibia

When setting out from Windhoek, pause for a moment and look up at the skies – they are the bluest of blue and are often filled with burgeoning, powder-puff-like clouds. This is something that many visitors remember vividly about our country! Cooler invigorating mornings and easier-to-sleep nights mean summer has had her chance and autumn has arrived! We still have some rain to look forward to though (Namibians love rain) and the balmiest of warm days mean that autumn is a favourite time to travel for visitors and locals alike.

One of the loveliest times to visit the Etosha National Park is during autumn. Young animals abound and by March, if the rains have been good, the savannah is green. By April the grass has yellowed and you might well see flamingos feeding out on the pan. In a year of good rains – and for reasons known only to them – they arrive between November and January, travelling all the way from Walvis Bay at night to breed on the pan.

The temperatures are definitely cooling down somewhat after the intense heat of summer. As the rains come to an end, there are still plenty of good clouds around, which make for great photography during April and May. Some roads may be closed near to the pan due to flooding, as they can become very slippery, but you can still experience good viewing all over, as there are plenty of young antelope running around to feed the predators right now. The east of the park near Namutoni is good for birding this time of year, as summer visitor species like European rollers and cuckoos hang around until early April, before heading north again.

Go East used to be the name of my favourite Indian clothing shop as a student back in the 80s. Now it’s the answer to any question about where I’d like to go in Namibia. East means mighty perennial rivers full of water, big trees, tropical birds and the possibility of spotting some of the Big Five game species – Caprivi being the only place in Namibia where you can see all five of them in one go, if that’s what you’re after.

And what better time to visit this lush, sub-tropical Namibian panhandle than towards the end of the summer rains, as the cooler autumn weather sets in? You’ll see rippling green savannahs, full rivers and leaves on the trees (which are often sparse during the rest of the year). All this water, of course, heralds mosquito festival time, so while you’re enjoying your shady tree or the cooler nights, you’ll need to slap on mosquito repellent and zip up your tent.

Rainfall up in the north-east can be as much as 700 mm or more around Katima Mulilo, so this means a lot of open water still standing around. Places like the Mamili and Mahango game reserves can become heavily flooded, so it’s best to stick to well-used roads. Temperatures are gradually easing off, although rain can still be expected during April.

Autumn at the coast is a lovely prospect. By this time it’s quieter following the crush of Christmas and New Year, and the weather is still summery. Swimming is good in March and long walks on the beach are a must! On the 27th you can watch the full moon rising over the desert while the sun is setting over the sea, ideally while enjoying a sundowner picnic on the beach. Now is also a good time of year (temperature-wise) to take a boat trip in Walvis Bay – you might spot dolphins and a proliferation of seals, and if you’re really lucky, a whale.

By April the sea temperature drops to 16 degrees C again, after a relative high of about 18 to 19 degrees Celsius in summer and you can still enjoy about 11 to 12 hours of daylight. Evenings can be cool and mornings misty. In an exceptional rainy year, you might be lucky enough to find the Swakop River has reached the sea. A few years ago the Kuiseb River also flowed to the sea and caused quite a bit of damage to the town of Walvis Bay.

The East Wind has been known to start blowing in as early as April, causing air temperatures to rise uncomfortably high. The hottest day in April in the last 15 years was recorded in 1999 when the temperature soared to 42 degrees Celsius near Swakopmund! 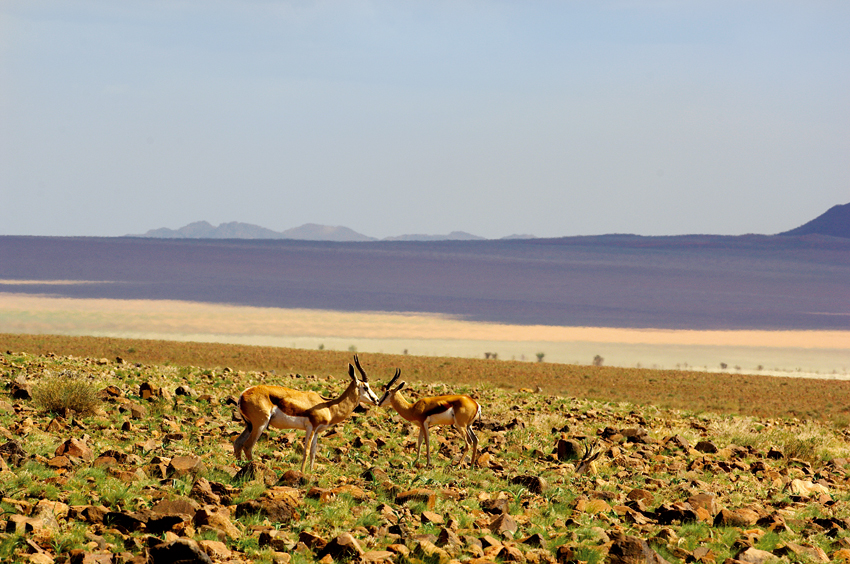 Springbok in the south of Namibia. Photo © Paul van Schalkwyk

Autumn brings relief from the intense summer heat and if the rains have delivered well, by now the rolling plains of the south will be green and undulating once again. Southern Namibia experiences a rather mixed climate insofar as the southernmost areas will have received some winter rainfall like neighbouring South Africa across the Orange River. But you never know quite what to expect in Namibia, as every year is different. At the time of writing (mid-February) we were still waiting for the summer rains to begin in earnest. The south seemed to be particularly unlucky this season. In a rainy year, the Sandhof Pan near Maltahöhe will produce its spectacular lily show, but perhaps this year there will be none due to poor rains. It’s a lovely time to travel though, as there’s a cool freshness in the air and it’s a great time for camping in the desert.

Generally autumn is the ideal time of year to travel around Namibia, as most of the countryside is still covered in a soft green fuzz, and thus seems less harsh and certainly more welcoming! By the end of May it starts to become noticeably colder, and the grass turns golden yellow as we prepare to welcome winter. So take the opportunity to travel at this time and experience our green season for yourself!

NOTE: Keep in mind that the risk of malaria is now at its peak, as standing water is the ideal breeding ground for mosquitoes. Malaria is still the number-one killer disease in Africa, so protect yourself with appropriate prophylaxis and mosquito repellent, and after dark be sure to wear clothing with long, close-fitting sleeves and trouser legs.

Camping sunrises are what dreams are made of.

Winter in Namibia has a smell