February 24, 2014
Today, the Namibian newspaper reported that an Antarctic minke whale (Balaenoptera bonaerensis) came ashore near the Walvis Bay pump station last Saturday.
The fishermen who discovered the whale contacted the Namibian Dolphin Project (NDP) and the Walvis Bay Strandings Network to help coordinate rescue attempts and to collect data.
The group of volunteers poured water over the whale to keep its body cool and spread towels over the whales sun sensitive skin. A stretcher was available to help lift the whale as the tide came in.

According to those present, the whale was a juvenile of about five metres long. Adult minkes can grow to nine metres long. From its lenght, it was estimated to weigh between one and two tonnes.
The Namibian reports that “when the water was high enough, multiple attempts were made to return the whale to deeper water with the much-needed help of the fishermen and other volunteers. Eventually the animal was moved far enough into the deeper channel past the pump station jetty, and it swam off in the right direction”.
However, the next day the whale was had washed ashore again, about 500 metres north of the jetty. 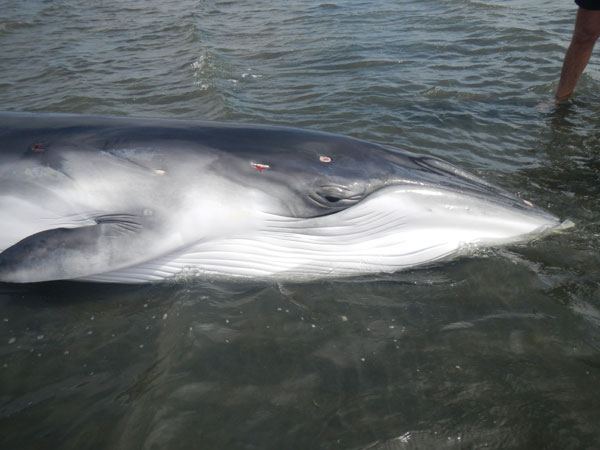 “It was not seen to restrand, nor has it been reported since, so we are hopeful that this young animal managed to find its way back to the open sea,” a statement issued by NDP on Wednesday read.

This is the fourth record of a stranded minke whale in central Namibia (two in Walvis Bay and one in the Skeleton Coast Park) the NDP is aware of, although live minke whales are occasionally seen in Lüderitz during summer months.

The NDP explained that the south-west corner of Walvis Bay near the pump station is a hot spot for strandings due to the shape of the bay (it blocks any direct route out of the bay), multiple channels which could confuse a navigating whale and the shallow slope of the sea floor, which makes the tide go out very fast.

Whales that are stranded are often sick or injured and can be dangerous to humans. Any sighting of a stranded whale, dead or alive, should be reported immediately to the Walvis Bay Strandings Network through Sandwich Harbour Tours (081 149 7377), Namibian Dolphin Project (081 421 4968) or the Ministry of Fisheries (061 410 1000).

This story was published in The Namibian, Friday the 21st of February 2014