Take a break between Keetmanshoop and Lüderitz

Journeys are about exploring and discovering. They are crammed with surprises: interesting people, fascinating stories and intriguing places. Instead of racing to your destination, consider slowing down and spicing up your trip with some colourful stops.

F rom Keetmanshoop, the capital of the Karas Region, the road to Lüderitz stretches westward towards the desert and the Atlantic Ocean. It’s one of those great drives for a number of reasons: the relatively short distance (335 km), the fascinating transformation of the landscape as you head into the desert and an intriguing choice of stops for farm stall fare, light meals, the famed wild horses of the Namib and the century-old history that incorporates the diamond rush and WWI. It is also a good route and halfway stop if you are on your way from the Fish River Canyon to the burnished dunes of Sossusvlei. So, don’t drive ‘tackie flat’, take your time and explore southern Namibia.

FLOWERING STONES & A SHORT-LIVED BROTHEL
Tawny hills and a series of flat-topped mountains characterise the landscape on the first stretch of the B4. Several quiver trees are dotted about, poking their heads up from the landscape like friendly figures with bushy hairdos. A tapestry of earthy colours in the winter, the land becomes meadow-green, intersected by flowing rivers, after summer storms.

Just 45 km west of Keetmanshoop, Seeheim Hotel is the first interesting stop for ‘biltong, droëwors, salami and apple pie’ as the sign at the entrance informs you. Seeheim has a fascinating and unexpected history. It was a busy stopover point for train passengers in the early 1900s and had two hotels and several shops – and even boasted its own brothel. The brothel didn’t last long with its stringent specifications for employees although there were, apparently, ample customers. Today there’s no evidence of this once bustling hub except for some foundations and the old hotel bar, now adorned with mounted animal heads. No-one seems to know where the brothel once stood, not even hotel owner and taxidermist Marinda Kloppers.

Like much of history, the story has survived, while the ruins have turned into desert dust.

Alte Kalköfen is the next stop to look out for. A short drive on the D462 leads you past the old limestone oven, the lodge’s namesake, and to the entrance. The wide veranda is an ideal lunch spot for a game pie and salad, a farmer’s burger or a salad platter (with greens from the garden) and a slice of apple pie. It overlooks an ancient camelthorn forest where some trees are said to be more than a thousand years old. This fresh and clean lodge has its own lithoparium – or lithops nursery – housing a variety of ‘stone plants’ from south and central Namibia. They burst into bloom at certain times of the year with delicate flowers that belie their tough façade. Owners Hilde and Frikkie Mouton are lithops enthusiasts and Hilde is one of the few people authorised to propagate the species from seed. Ask the Moutons to take you for a short tour of their lithoparium – and to point out their euphorbias and stapelias along the way.

FARM FAVOURITES & CENTURY-OLD HISTORY
Fifty kilometres before you reach Aus, Kuibis Restaurant on the right-hand side of the road is the place to purchase biltong. Kathleen and Japie Loots opened the restaurant on their sheep and cattle farm in 1992 and sell their own biltong (beef and game) and a selection of fresh meat. Kuibis also sells toasted sandwiches and pies, and farmstall favourites: homemade cookies, koeksisters and ginger beer.

For those who believe that a graveyard reads like a book, don’t miss the Commonwealth war graves just before you reach Aus. Take the turnoff to the D705 and veer right. After approximately 1.3 km you’ll reach the site. The small graveyard is the resting place of soldiers who died in WWI. Many of them were killed by the influenza epidemic that swept through the area in 1918. The flu epidemic didn’t differentiate between prisoner and guard in Aus’s prisoner-of-war camp, and friend and foe are buried side by side.

The friendly team at Kuibis Restauarant, 50 km east of Aus.

Animal caution signs dot the roadside between Aus and Lüderitz.

The sleepy and unassuming settlement of Aus has witnessed a century of history, booming during the 1908 diamond rush and the lucrative karakul market in the 1960s and then settling back quietly into the rocky hills that characterise the area. It’s a good place to fill up on fuel and to purchase supplies at the Namib Garage One Stop shop. The Bahnhof Hotel, marked by colourful flags, is on the site of the original hotel which was built in 1906 when the railway station, or ‘bahnhof’, on the Lüderitz line attracted trade and passers-by. The Bahnhof has an extensive menu and serves coffee and a selection of cake. Bernd Roemer offers history tours of the area for those with more time on their hands.

STRIKING VISTAS &WILD HORSES
Continuing westwards, Klein-Aus Vista is a few kilometres further on. With a choice of attractive accommodation and an appealing campsite, this lodge owned by the Swiegers family is an ideal overnight stop or base in the area. Piet Swiegers has created a series of walking and mountain bike trails that run through the granite-gneiss hills. Hire a bike for the afternoon or stretch legs on a trail to gaze at the spectacular vistas from the lofty viewpoints. Mountain bike fans may want to plan their trip around the Klein-Aus Vista Mountain Bike challenge, a popular mountain-biking event that takes place annually at the end of April/beginning of May.

Klein-Aus Vista is at the point where the Namib Desert meets the Pro-Namib and grassy plains merge with sand in striking bands of colour. The road stretches ahead through this extraordinary landscape, accentuated in the early hours and latter part of the day. Don’t miss the turnoff to the Garub viewpoint, 20 km after Klein-Aus, to visit the wild horses of the Namib. A short stony track leads to a hide overlooking the waterhole and stark plains, backed by mountains and an inselberg called Dikke Willem. This exceptional horse population has survived in the extremes of the desert for over a century. Watch family groups gallop to the waterhole with the wind whipping their manes and the dust exploding under their feet – and feel your soul sing to the tune of the desert.

A short detour from the main road leads to sleepy Seeheim, once a bustling railway siding.

This old lime kiln, namesake of the Alte Kalkoefen lodge, was built in the early 1900s.

Windswept Diaz Point marks the spot where Bartolomeu Diaz planted his cross in 1488.

GHOST TOWNS & DIAMOND DREAMS
As you make your way towards the coast, the expanse of sand dotted with bleached grass transforms into gravel plains and the rocky desert landscape. Keep a lookout for animals along the road, especially around dusk and dawn (and avoid driving at night!). Soon the road signs caution drivers that they have entered brown hyena territory.

On the outskirts of Lüderitz, the old diamond town of Kolmanskop appears like a mirage in the desert. It’s worth a visit to the ghost town to hear the incredible story of the diamond rush and the opulence that once touched the desert. Kolmanskop is open until 1pm, with guided tours at 9.30 and 11.00. Stretch your imagination to visualise how people flocked to the diamond mining towns, bringing their European finery to the Namib Desert. It is said that at the height of the diamond rush champagne was cheaper than water. Kolmanskop is also a photographer’s paradise and playground. Peeling wallpaper, dappled light and mounds of sand gathered in abandoned corners provide spectacular photographic material and hours of fun.

Finally, the desert town of Lüderitz appears, held in the wizened hands of the rocky hills. Here lie promontories to explore, Diaz Cross, an oyster factory and many a diamond dream. 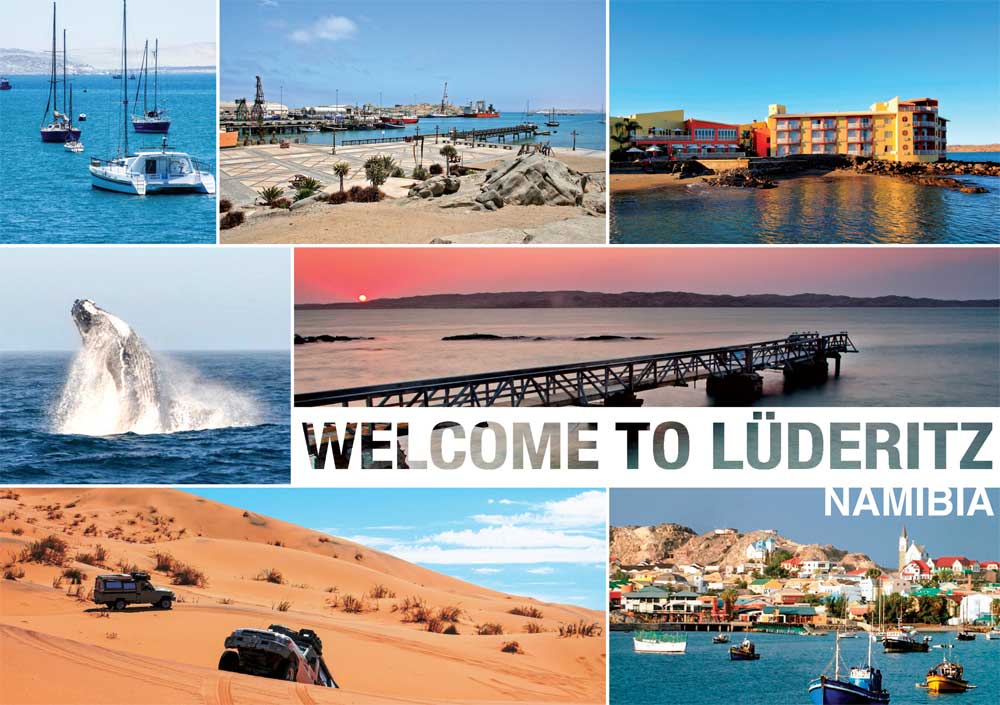 Check out the all new Lüderitz visitor book
Welcome to Lüderitz
online at www.travelnewsnamibia.com/luderitz