The thousands of flamingos, a mass of pink and white, were quietly honking as they preened and fed in the protein-rich water of the Walvis Bay Lagoon. Terns by the thousand were wheeling, circling and plunging into the water, their shrill calls a contrast to the deep honking of the flamingos. Thousands of cross-shaped forms lined the water’s edge – cormorants with open wings drying in the sunlight. Hartlaub’s and kelp gulls paraded busily along the sandbars. A few Caspian terns, with their large red bills like neon signs, sat quietly on the sand. Pelicans dwarfed most of the other, smaller birds. Hundreds and hundreds of curlew sandpipers, little stints, sanderlings, avocets, turnstones and various plovers were busily pecking on the exposed mudflats – a scene of organised chaos.

T he roar of a low-flying aircraft shattered the peaceful scene. Thousands of terrified birds roe into the air, confused by the overwhelming noise. The flamingos were a spectacular sight as they rose in a pink cloud into the air. A photographer’s dream? Unfortunately, this was the cause of the  deliberate disturbance over the protected area of the Walvis Bay Lagoon. An inconsiderate photographer and careless pilot were disturbing the feeding birds without realising the consequences of their actions. For water birds, the Walvis Bay wetland and Ramsar Site is the most important feeding area on the west coast of Southern Africa.

A wetland is an area continuously or periodically flooded. Animal and plant life is adapted to living in this highly specialised environment. Various wetland types are found, for example river mouths and their floodplains, pans, fountains, pools, dams, swamps and coastal inter-tidal zones.

In 1971 the town of Ramsar in Iran was the scene of a pivotal international meeting. Attending scientists from around the world drew up the Convention on Wetlands of International Importance, especially as a habitat for water birds, which became known as the Ramsar Convention. The main aims of the convention were to find a way to prevent the loss and degradation of wetlands worldwide and to ensure that they are wisely and sustainably used, while conserving their biodiversity. Water birds is a term used to cover all birds dependent on water during some part of their life cycle, such as plovers, sandpipers, flamingos, herons, ducks, geese and terns.

A Ramsar Site is thus a wetland of international importance. The following criteria are used to determine whether an area can be registered as such:

The Government of Namibia became a signatory of the Convention on Wetlands of International Importance on 23 December 1995. The five Ramsar-designated sites are Walvis Bay Wetlands, Sandwich Harbour, Orange River Mouth, Etosha Pan and Bwabwata-Okavango. 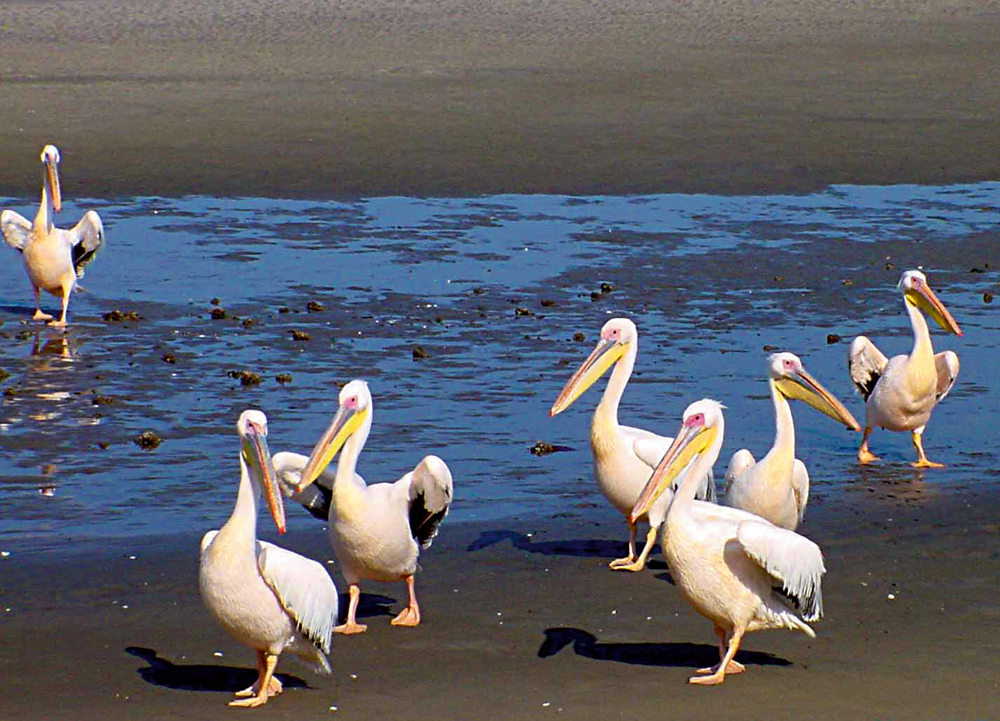 The Walvis Bay wetlands are of great importance to migrating Palaearctic birds, that is birds coming from the northern hemisphere, and intra-African migrants. Every year as it becomes colder in northern Europe and Asia, thousands and thousands of birds migrate south, many spending the southern summer on the coast of Namibia and South Africa. During the summer they are continually feeding to build up a fat layer to sustain them on their long flight north to their ancestral breeding grounds. Birds with insufficient reserves perish somewhere on the route. This could be due to a food shortage in their summer feeding grounds or, because of continual disturbance, they did not have enough time to feed and build reserves. Aircraft carrying tourists that fly too close to flamingos is detrimental to the well-being of all the birds. It could also be detrimental to the well-being of the people in the aircraft, because of a possible collision with a large bird.

The importance of the Walvis Bay Ramsar Site is supported by the following statistics:

Wetlands are generally known for their natural beauty. They attract locals and tourists alike, for water, food, building material and recreation. The latter in turn stimulates the tourism potential and benefits local communities who provide labour, crafts, guides, accommodation and other facilities. And since bird watching is the fastest-growing sector within the ecotourism field, the Walvis Bay Ramsar Site is gaining in reputation as a top birding destination. More and more international birders are making the harbour town a priority stop on their birding itinerary.

The lagoon, which has been a haven for birds and other animals for hundreds of years, is an integral part of Walvis Bay. In tourism terms it is the prime asset in the harbour town. Possibly, due to industrial development and road building, natural scouring actions by the tide may have been reduced, resulting in wind-blown sand silting up the lagoon. Thus it is of the utmost importance for the future of the Walvis Bay Lagoon, its birds, animals and people that the area is protected from unsustainable and poorly planned developments.

This article is a tribute to Keith Wearne (1926–2008), who died in Walvis Bay of a heart attack on 18 July 2008. Keith was best known for his work on flamingos, shorebirds and the conservation of Namibia’s desert wetlands, particularly the Walvis Bay wetland. He was the brain behind the Coastal Environmental Trust of Namibia, and it is largely due to Keith’s efforts that Walvis Bay is recognised as one of Africa’s premier sites for coastal shorebirds, especially lesser flamingos.