Anja Denker | A World in 3×4 Centimetres

I arrange to meet Anja Denker, the stamp artist, at her studio early in the morning so that we can catch good light for photographs, but stepping inside her artistic haven, I’m completely distracted by the paintings and stamp posters that line the walls.

Apart from the visual feast that inspires and fills many artists’ studios, there are loads of interesting books for research, lovebirds twitter on the branches outside the window, trees sway gently in the breeze and yes, the morning light that fills the space is really good. A feeling of well-being pervades.

A black-and-white drawing of an elephant, part of a calendar series she’s working on, stands unfinished on her desk. This is a new venture for Anja, in which she combines her drawing skills and her new-found passion, wildlife photography. More about that later on – today I’m here to learn about the intricate art of stamp painting.

Anja’s career in art didn’t follow the usual path of many established artists who seem to know they are heading in that direction from an early age. She did the mandatory ‘art as a subject’ in primary school, but didn’t really pursue it after that.

Here Anja discovered portraiture, dabbling at first in charcoal, shunning oils, and finally finding her true love in watercolour painting. Returning to Windhoek a few years later, she began doing freelance illustration of children’s and school books for Gamsberg Publishers, while working as a full-time secretary during the day. The move to full-time art came about when Anja gave birth to her daughter Alexa in 1999, and a new era began in more ways than one.

An immediate attraction to the discipline

Anja tells me that she first encountered stamp design when she attended a course offered by Koos van Ellinckhuijzen in 1997. For her there was an immediate attraction to the discipline. She has always loved painting realistic, natural subjects in a true-to-life style, so this appealed to her sense of order and attention to detail.

Her new career began in earnest. Since then Anja has painted more than 100 single artworks, mostly for stamps, between 2001 and the present. She has also taken part in two exhibitions in Windhoek, both at the Omba Gallery. The first was a joint exhibition with a few fellow artists in 2005, in which she exhibited botanical paintings. The second was in 2010, an exhibition entitled Merge, again with several artists. Her work at that time featured seascapes 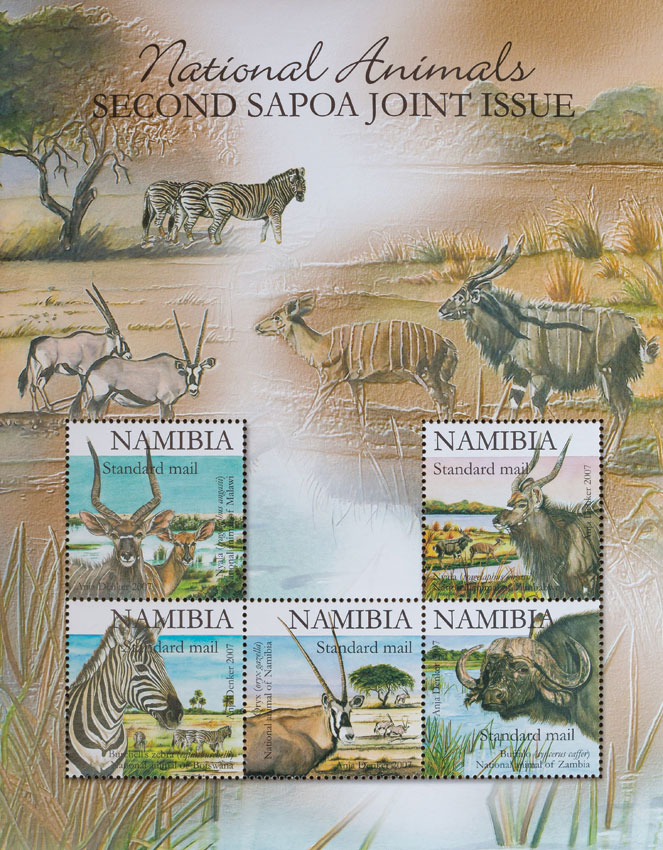 Stamp painting is quite a specialised field, as Anja explains. You need a certain set of skills in addition to artistic ability. These include meticulous attention to detail, a very steady hand and good eyesight. Apart from these skills, there are two other areas that require the attention of the artist.

Firstly, she or he must engage in hours of painstaking and careful research, seeking the opinion of experts who can advise you on the particular subject you are tackling, such as museum experts or scientists in that particular field. Observation of your subject where possible, is useful to capture the sense of movement and motion. Anja has often gone out to photograph her subject and then paints from her own images wherever she can. A few years ago she did a trip down south to visit the wild horses of the Namib to capture images for that stamp series.

Secondly, the artist also writes the insert to the first-day cover envelope on which the new stamps are issued. This includes all sorts of information about the theme depicted on the stamp, and has to be factually correct and well written.

A finely tuned art in all respects

I have always thought that stamps were shrunk-down mini versions of A3 or bigger paintings, but Anja assures me that there is a fine art even to the sizing of the stamp! Let’s say you want to produce a 4-cm-square stamp. You will need to scale those exact measurements up three to four times, so that you end up with canvas no more than an A5 sheet. This has to be extremely precisely done so that the finished product is exactly the right size when it is reduced again in the printing process! That’s quite a small artwork to work on – no wonder good eyesight is needed!

When designing the stamps, Anja says the artist will also design the layout of the first-day cover, deciding on the font to be used, making sure there is space to write an address on the front, and generally deciding what fits where best, depending on how many stamps the post office requires for that particular envelope.

In addition to the stamps themselves, the artist also designs the ‘canceller’. This is a black-and-white drawing in keeping with the theme of the other stamps and is used to cancel stamp issues.

In 2006, another set of her stamps – the first joint SAPOA issue entitled National Birds of eight participating African countries – received the award for Best Souvenir sheet in the world for the Botswana postal service at an exhibition in China. She has also offered two workshops for aspiring stamp designers in Botswana.

Her advice for those seeking to follow in her footsteps is twofold: Contact Nampost in Namibia and show your interest, and then find a stamp-design course to learn the finer details.

It is with some regret that I learn that this talented artist’s last stamp envelope will be released in October this year. It features some of the various kingfishers found in Namibia. Anja smiles and says that her eyesight is not as good as it used to be and she has become a little weary of producing art on demand.

From now on she is looking forward to focussing more on spontaneous artwork and her new-found passion, wildlife photography. It’s something she has done for many years in the line of stamp research, but now she’s keen to focus her attention on photography for its own sake.

She escapes to nature as often as time allows to fulfil this passion, and she is looking forward to several new projects in photography. These include the calendars mentioned, and there’s also a book or two in the pipeline. Anja is also highly involved in the fund-raising and support of the desert lion project, so there is a great deal to keep her busy.

After we’ve looked through many stamp images and I’ve learnt so much about this fascinating miniature world, it’s time to take my leave of the artist and her studio. Who would have thought that so much detail and effort goes into those small stamps we just lick and stick without a second thought!