A Mountain Bike Trip Through the /Ai-/Ais Richtersveld Transfrontier Park

There’s a world of fun to be had on two wheels, even if they’re bouncing up and down almost uncontrollably. I gained this tidbit of knowledge while on a recent adventure in the south of Namibia with the Desert Knights Tour.

The trip is a six-day mountain-bike event that is held annually in the /Ai-/Ais-Richtersveld Transfrontier Park, drawing avid mountain bike enthusiasts from across Namibia and South Africa. The riders take on the 280-km cycling route across spectacular desert landscapes, with daily rides starting in the late afternoon and often ending well into the night under the light of the full moon.

I set off early in the morning from Windhoek and headed south to the Fish River Canyon, the starting point of the tour, fully prepared for whatever these mountain bikers would throw at me. Little did I know that in six short days I would be heading back along the same road with a new perspective on the value of two wheels- after meeting an electric group of people, each one different from the next, with a 59- year age gap between the youngest and the oldest rider, and having gone on excursions that had nothing to do with cycling, albeit everything to do with showing off the majesty of nature in Namibia.

The first day of the adventure was one big meet and greet. Upon our arrival at Hobas Camp near the Fish River Canyon, a team of lovely ladies handing out goodie-bags welcomed the participants, as well as those of us who were tagging along. we were kitted out with t-shirts, bags, hats and water bottles, all items we might need on the arduous desert journey lying ahead. As the sun neared the horizon it was time for the riders to mount their bikes and head off for the first leg of the journey, a round trip that would lead them back to Hobas, but only after taking them over rocky plains dotted with inquisitive mountain zebra and along the canyon’s edge to the new Namibia Wildlife Resort (NWR) lookout point.

I dutifully followed along a different road with the crew game-viewer to the lookout point and watched the sun set behind the far edge of the canyon while waiting for the – by now surely exhausted – cyclists to arrive. The adventurers were not as tired as you might have expected though. Shortly after the sun had disappeared behind the western horizon, the sound of laughter, hoots and wheels gliding over rocky paths could be heard and the first group skidded into the lookout-point rest stop, exhilarated and bursting with excitement.

” Watch out for that big donga over there, ” one of the riders exclaimed jokingly as their path led them close to the sudden drop-off into the canyon. The rest followed and soon enough the gravel road was littered with tiny bicycle lights making their way to where we were waiting. The twinkling row of lights and the bright moon were all that breached the darkness. About an hour later the riders set back towards camp, and after some well-deserved showers the sitting-logs around the camp fire started filling up, the chatter in the night air increased in volume and jovial energy flowed. The excitement of the days to come was palatable after their first taste of desert cycling in their playground for the week.

…soon enough the gravel road was littered with tiny bicycle lights making their way to where we were waiting.

I awoke on Day 2 to the sound of birds chirping, crew members hurriedly preparing breakfast and ‘Ooms’ snoring in nearby tents. As the day’s riding would start only in the late afternoon, a small group of us gathered to hike to a nearby waterfall with our affable guide, Samuel, who had discovered it while he was clearing the road for the cyclists the week before. We soon learned that the waterfall was minus the water and the 5-km hike was more like a 14-km trek. We had a ball of a time, nonetheless, indulging in a swim when we happened on water, sidestepping an irritable Cape cobra and getting up close and personal with a herd of mountain zebra as they trotted by, undisturbed since we weren’t thundering along in a heavy game-viewing vehicle.

We spent the rest of the day at camp, enjoying the pool, catnapping under the trees and resting up for the ride to come, which included a few gruelling uphill climbs in the late, still-hot afternoon sun. Soon, however, the rising moon lifted our spirits and the 72-km stretch of the second half of the day was spent in the significantly cooler light of the full moon. Geckos barking in the evening air and the calming breeze gave us courage for the rough corrugated terrain and scary bends, which were sending a thrill through our nighttime adventurers. That evening we stopped over at the /Ai-/Ais Hot Springs resort, where the next morning some of the riders indulged themselves in the spa and hot pools, relaxing and becoming physically and mentally prepared for the challenge of the day.

The route on Day 3 led the riders off the beaten path (aka the corrugated gravel road) onto a 4×4 trail for a real off-road adventure. I drove ahead to join the crew at the half-way rest-stop mark and discovered some beautiful ruins in the middle of what seemed like nowhere, including an old trading outpost, a broken windmill, ancient cars and trucks, and a dilapidated church constructed with rocks and zinc sheets, long since fallen into decay.

On the fourth day of our adventure I decided that my bakkie needed a rest, so I left it behind in favour of a two-man kayak, in which we embarked on a 20-km paddle down the Orange River to our next camp. The sun beat down on our backs as we cruised along the smooth water surface, intermittently battling with rapids, some of us taking a quick involuntary dip in the refreshing river water. Our spirits were soaring as the cyclists, having traded their wheels for oars, splashed water at each other and enjoyed their ‘chill day’. Our day on the river gave me a taste of what the new Desert Kayak Trails are like in the /Ai-/Ais-Richtersveld Transfrontier Park.

Our spirits were soaring as the cyclists, having traded their wheels for oars, splashed water at each other and enjoyed their ‘chill day’. 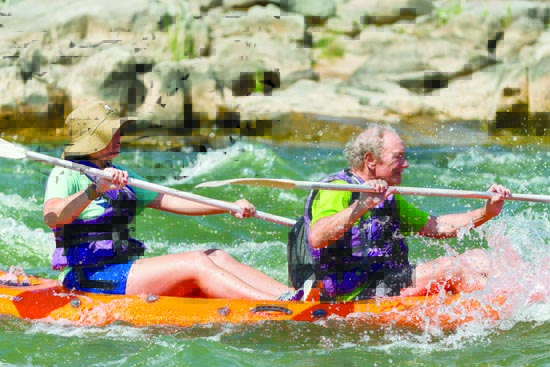 If one day on the river was that much fun, I decided I couldn’t wait to spend four days taking in the wilderness while birding, fly-fishing and swimming, so sign me up! We spent the fourth night camping on the riverbanks at the De Hoop campsite, enjoying a mouth-watering traditional Nama meal around the campfire and receiving some lessons in African drumming. I even learnt how to blow a gemsbok horn, because, as we know, in 2010 vuvuzelas became the in thing.

Since we were now on the South African side of the border, having made an undesignated border crossing the day before, our penultimate day involved traversing steep mountain routes into the Richtersveld. I joined the media crew’s game-viewer truck as we followed the cyclists along the strenuous tracks and found an ideal spot to wait for each rider so that the tour photographer, Paul Sutton, could capture those all-important action shots as the cyclists whizzed by.

With the moon rising over the surrounding mountaintops, I revelled in the fact that there were people besides the Desert Knights who were enjoying the mixture of nature and adventure as much as they were. There’s something to be said for these knights on their iron-framed horses who brave the elements and the unforgiving desert landscapes of Namibia to experience the world in a different way and challenge themselves to do something out of the ordinary. From the numerous conversations I was fortunate to have with several of the participants, I gathered that gliding across these terrains under the light of the full moon broadens your horizons and truly is a life-changing experience.

Gazing up at the starry night. Photo ©Paul Sutton

At breakfast on the final day Francois, the trip coordinator from NWR, told me that the riders always cycle fastest on the last day, and he was right. Like impatient horses being let out of a paddock, they set off in a flurry of wheels, their helmets bobbing and giving excited chirps, leaving only their dust and another great night under the African stars behind. Every rider we passed had a massive smile plastered across his or her face. After a morning of more uphill climbs and exciting single-track trails, the riders finally made it to the end of the challenge – Sendelingsdrift. Here I had to say my sad goodbyes to newly made friends and hop onto the pontoon to cross the Orange River for the journey back to Windhoek. I left with a sense of reverie at these strong-willed individuals who had set off into desert nights to conquer the mighty /Ai-/Ais-Richterveld Transfrontier Park under a brightly-lit evening sky, chasing adventure and their own moon shadows.

Throughout the week the rest stops were the social hub of the tour. Here riders stocked up on water, Powerade and even beer, while they chatted animatedly about their twists and turns, spills and falls – and proudly showed off their battle wounds.

Remarks made during the trip

“I don’t trust organisers of MTB events. Their distance meters don’t work, and their elevation meters don’t work either. They’re very good with people and they’re extremely nice and organised, but none of their meters work!”

“The sand is your friend!”

You can book now for next year’s Desert Knights Tour on StayToday at www.staytoday.com.na

Exploring ghost towns and rusty wrecks of the Namib