The man behind the Desert Lion Project

November 18, 2013
The Cheetah Conservation Fund (CCF), the world’s leading organisation dedicated to saving the cheetah in the wild, announced today that it is sending four puppies from its celebrated Livestock Guarding Dog programme to the Ruaha Carnivore Project in Tanzania. With the arrival of these puppies, CCF will share this highly effective predator-friendly control technique with livestock herders in Tanzania.

The four puppies, two male and two female, are Kangal dogs, a breed famous in their native Turkey for guarding small livestock herds against wolves and bears for thousands of years . The pups were born on the 18th of August 2013 to CCF’s, Aleya, sired by Firat, both purebred Kangals, and have been spayed and neutered.
CCF’s Livestock Guarding Dog programme has been placing dogs with Namibian farmers since 1994. Since then, CCF has placed over 450 dogs. The livestock guarding dogs bond with their herds, and are highly effective at deterring predators. Their loud and ferocious bark deters predators, and farmers using a CCF dog see their predation rates from all predators reduced by 80 to 100 percent. Because the farmers feel more secure in their livelihoods, they are less likely to do harm to cheetahs and other predators.

The dogs are being sent to the Ruaha Carnivore Project (RCP) in Tanzania, which is run by Dr. Amy Dickman. RCP is part of Oxford University’s Wildlife Conservation Research Unit (WildCRU), with whom CCF Founder and Executive Director Dr. Marker conducted her doctoral research. Dr. Dickman spent six years in Namibia working with Dr. Marker in the Livestock Guarding Dog programme, and has published several research papers with her documenting the effectiveness of the dogs.
The RCP works to develop conservation strategies for large carnivores in the important Ruaha Landscape. The new puppies will be placed with farmers from the Maasai and Barabaig tribes. 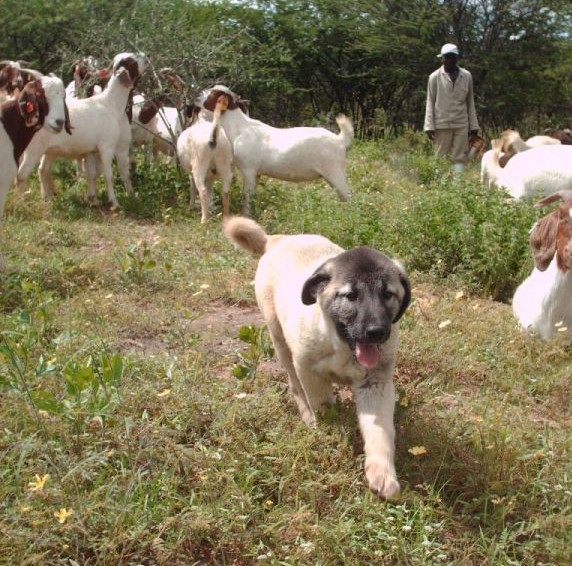 The placement with RCP in Tanzania marks the fourth country in which CCF has placed puppies so that other organisations may start their own livestock guarding dog programmes. CCF’s Dr. Marker sees this as an important part of her work. “We’ve been developing programmes in Namibia to save predators for nearly 25 years working from here to help other cheetahs in other of its range countries. Our research shows that solutions like the dogs are very effective. Every time we help start a new programme in another country, we’re thrilled, because we know we’re making real progress in the race to save the cheetah, and all predators.”
Mr. Ayoub Msago, RCP’s Community Liaison Office, is now traveling back to Tanzania with the dogs, after spending two weeks at CCF in Namibia to learn about the Livestock Guarding Dog programme. He traveled over 1300km around Namibia with CCF’s staff, visiting working dogs on Namibian farms, learning how the dogs are trained, and how CCF’s Livestock Guarding Dog programme is managed.

Once he returns to Tanzania with the dogs, goats from neighboring farms will be brought to a specially prepared kraal in the RCP research area and will be introduced to their new owners next week under Dr. Dickman’s supervision. This will be the first known attempt to bring in specialized guarding dogs to help Tanzanian pastoralists protect their livestock. The communities these dogs will serve in are extremely poor, with the majority living on less than $1 per day. Carnivore attacks cause major problems for these pastoralists and lead to high levels of carnivore killing.
“We are very excited about getting these dogs,” says Dr. Dickman. “The protection the Livestock Guarding Dogs provide reduces the cost of living alongside predators, which means a decrease in human-wildlife conflict. With these dogs, we will learn much more about how well this conflict mitigation tool can be applied to East Africa, which will help us develop effective plans for the future.”