A drive a day keeps the boredom at bay

When Windhoek has become somewhat ‘stale’ and you’ve run out of ways to spend your days, hit the road!

In any case, what’s not to love about Namibia’s wide-open roads? Turn the music up and enthuse the kids to sing along; open the windows wide for the wind to blow the dust from your clogged-up overworked brain; and lose yourself in the beauty of the passing scenery while pumping up anticipation for the adventure at the end of your journey. What could be better than having the excitement literally just down the road!

Eland at the Daan Viljoen park

Set in the rolling hills of the Khomas Hochland, the Daan Viljoen Game Park has been serving as a popular retreat since the 1960s. Although comparatively small (just under 40 km2), the park gives sanctuary to a relatively large population of game species typical of the Namibian highlands, plus approximately 200 bird species have been recorded here. Visitors are encouraged to experience the flora and fauna of Daan Viljoen on foot. Situated in the Daan Viljoen Game Reserve is Sun Karros Lifestyle Safaris, where you can find contemporary modern African chalets, luxury campsites, conference facilities and restaurants, all of which cater for day visitors and are equipped to host events.

Accessible from the B1 from Windhoek to the north, sign-posted about 3.5 km south of Okahandja, the Von Bach Dam and Game Park extends over some 43 km2. The facility, proclaimed in 1972, has become a popular venue for aquatic sports such as water-skiing, yachting, windsurfing and boating. The dam is popular among freshwater angling enthusiasts, as it has been stocked with large-mouth bass, blue kurper and small-mouth yellow-fish, while carp and barbel also occur here.

Facilities include en-suite bungalows, campsites, picnic sites for day visitors, and a restaurant that overlooks the dam.

About 100 km north-west of Windhoek off the B1, the Gross-Barmen Hot Springs Resort is another popular day and weekend destination. The main feature of this facility is the large dome-shaped, glass-enclosed thermal hall, which houses a communal bath of steaming spring water (65˚C). The resort was recently renovated to cater for health and beauty enthusiasts as well as for fitness, leisure and adventure fans.

Directly north of Windhoek lies Okahandja, a town of great significance to the Herero people because it was once the seat of the famous Chief Samuel Maharero. Every year on 26 August thousands of Hereros converge on the town to pay homage at the graves of their ancestral chiefs. Visitors are welcome to view this legendary, rich and colourful ceremony. 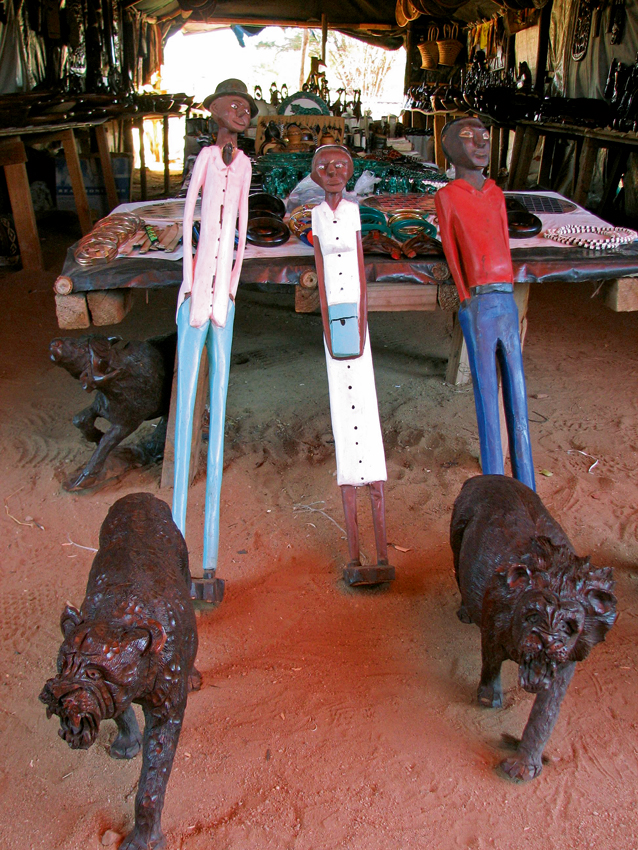 The town is an important centre for woodcarvers from the north. They practise their ancient skills at the wood-and-thatch Mbangura Woodcarvers Market next to the main road at the entrance and exit of the town. Okahandja is also a good place to buy biltong.

Situated 10 km outside Okahandja off the Hochveld Road is the Okahandja Cultural Village, which houses the homesteads of seven of Namibia’s cultural groups – the San, Tswana, Caprivians, Damara, Ovahimba/Ovaherero and Owambo – and is aimed at preserving and teaching the country’s cultural diversity.

The largest town east of Windhoek is Gobabis, an important cattle-ranching centre. Gobabis is the gateway to the Trans-Kalahari Highway, linking Namibia to Botswana and South Africa.

Gobabis developed around a mission station established in 1856 by Friederich Eggert of the Rhenish Missionary Society. The Gobabis District was proclaimed by the German authorities in February 1894, and in June the following year, Gobabis was occupied by a German garrison. While the military fort, built in 1896/7, has long since disappeared, one of the few buildings dating back to that era is the field hospital, or Lazarette, which has been declared a national monument.

Features worth a stop are the Gobabis Museum, and the Uakii Wilderness & Gobabis Info and Coffee Shop – the only tourism information office in the Omaheke Region.

Approximately 100 km north-east of Gobabis is the Harnas Wildlife Foundation and Guest Farm, where neglected, abused and abandoned wild animals are rehabilitated, and a variety of accommodation options are offered.

South-east of Windhoek is the historical town of Dordabis, where cattle farmer and local businessman Michael Krafft of Farm Ibenstein took on the massive task of renovating the historical buildings of Dordabis. The Krafft family has lived in the Dordabis environs for many years. Michael is the grandson of August Stauch, the diamond pioneer of Kolmanskop, who developed Dordabis as a trade centre in the 1920s.

Four kilometres from Dordabis, producers of karakul carpets can be visited at Ibenstein Teppiche. Also in this area is the farm Peperkorrel, where the well-known Dorka carpets are made. Peperkorrel also houses a sculpture studio, with works by local artist Dörte Berner.

Situated south of Gobabis is Leonardville, a small town that used to be the main settlement of the Kai|khauan sub-tribe of the Orlam Nama until their military defeats against the Schutztruppe in 1894 and 1896. Further south, in the vicinity of Mariental, the C20 heads east into the Kalahari Desert towards the small cattle town of Aranos. En route it passes Stampriet, a small settlement where, sustained by artesian water flowing in from the Kalahari, fruit and vegetables are cultivated. At Stampriet, the C15 heads south along the Auob River towards Gochas. Along this route lie a number of battle sites and memorials dating back to the 1904–1907 war of resistance against the Germans.

Some 88 km south of Windhoek is the historical town of Rehoboth, inhabited by the Baster community, descendants of people of mixed parentage who trekked across the Orange River under their leader Hermanus van Wyk and settled at Rehoboth in 1870.

The history of the Rehoboth Basters is recorded in the Rehoboth Museum – established by local anthropologist Dr Beatrice Sandelowsky – where displays detail the cultural heritage of the Basters and archaeological finds in the area, such as an open-air burial site.

Other features worth a visit include the Kaptein’s Tree, used as the venue for the meetings of the Kapteinsraad, an equivalent of a Chief’s Council; the historical Evangelical Lutheran Church; War Monument and German soldiers’ graves; the grave of Ida Heidmann, a noteworthy missionary who worked amongst the local people; the library, which was also the former house of Captain Cornelius van Wyk; the Rehoboth School of Arts; the impressive Acacia Forest – an area of some 8 400 ha well known for its large camel-thorn trees (some estimated to be 2 000 years old); Reho Spa and Recreation Resort; and Bahnhof Station.

Just west of Rehoboth is Oanob Dam, which supplies Rehoboth with water. Oanob is a favoured venue for bird-watchers and water-sports enthusiasts. Overlooking the dam are picnic places with barbecue facilities, a restaurant, bungalows and a number of walking trails.

Situated 178 km south of Rehoboth off the B1, Mariental is a small, friendly and flourishing market town. A local ostrich abattoir caters for this increasingly important industry. What survives of the karakul trade in the south is centred around Mariental. Sitting astride the main route to the Kalahari and Namib deserts, Mariental services the needs of farmers in these areas and supports large-scale irrigation farming. Mariental is home to a large number of Nama-speaking people, descendants of the early Khoi inhabitants of Namibia.

When travelling in a circular route in the Gamsberg surroundings, the scenery is spectacular, especially along the Gamsberg, Spreetshoogte and Remhoogte passes.

Dominating the landscape 120 km south-west of Windhoek and characterised by its conspicuous cap of weather-resistant quartzite sandstone is the Gamsberg, a large table-topped mountain that rises some 500 metres above the surrounding Khomas Hochland. With a height of 2,347 metres, it is Namibia’s fourth-highest mountain. The plateau is regarded as an outstanding site for astronomical observations, as the night sky is unusually clear and the absence of towns and resultant darkness of the surroundings makes it an ideal location from which to study the stars of the southern hemisphere.

Windhoek is situated in the Kalahari Basin, with the areas east and south-east of the capital classified as the Kalahari Desert. The Kalahari is well worth visiting to experience the magnificent red dunes and meet its traditional inhabitants, the San (Bushmen), who have been surviving here for around 20 000 years as hunter-gatherers. Although its name was derived from the Tswana word Kgala, meaning ‘great thirst’, the Kalahari supports a considerable diversity of fauna and flora.

The Mata Mata Gate on Namibia’s eastern border, leading via Sendelingsdrift on the South African side into the Kalahari Gemsbok Park, offers further opportunity to explore.