Scorpions of the Namib Desert

You’re heading for disaster, because
you never read the signs.
– Queen –

I f we acknowledge that the 25 bird species which are on the endangered list in Namibia  could be extinct in 20 years’ time (a 20% chance) we should start thinking hard and long what we as Namibians can do to prevent this from happening. Will these 25 bird species end up being shadows on the wall? The idea that these birds are on their way to becoming history is not a bird lover’s pipe dream.  The fact that taxis will be extinct by then is unfortunately a pipe dream. The reality of these birds becoming extinct is based on facts if past and present trends are taken into account. These trends indicate that if their numbers keep on declining as they have been doing so far this is a very real and unfortunate reality. Small populations and restricted distribution are probably the main reasons for their seriously declining numbers. Unfortunately politicians are not an endangered species: it is therefore important to recognise that ‘endangered’ and ‘dangerous’ are two wholly different concepts.

Although one immediately thinks that this decline is the result of culling and shooting (as is the problem with their bigger and more visible counterparts in the wild like the rhino, elephant and painted dogs), the real reason is unfortunately a direct result of human intervention in nature. Like many other fauna and flora birds depend on a specific environment where they can live and thrive in a safe haven. One can only look at global warming (human effect), witchcraft, poisoning,  the reduction of different habitats like farming, industrialisation and pollution (indeed all human factors) which reduce these very special habitats to such levels that there is no place left for the birds to survive.

Probably the most vulnerable habitat in Namibia is the Zambezi region where flood plains, marshes and rivers are under a real and constant threat. This area supports 12 of the 25 endangered species in Namibia. Pollution and uncontrolled fishing are probably the big culprits in these areas. In the rivers and associated breeding habitats, disturbances (such as speed boats) threaten the African Skimmers, African Finfoot, African Fish-eagle and Rock Pratincole. The floodplains and marshes host the African Marsh Harrier, Rufous-bellied Heron, Saddle-billed Stork, Slaty Egret and Wattled Crane.

The Yellow-billed Oxpeckers are of great concern, because  insecticides that were (and still are) used indiscriminately on livestock are eradicating these birds from most areas of our country. Needless to say that poaching and the subsequent poisoning of carcasses are on the increase and the Bateleur, Hooded Vulture and White-backed Vulture populations are fast becoming extinct thanks to this type of brainless action. Namibian farmers are some of the main culprits who, in the process of trying to kill jackal and other wild animals, subsequently destroy this valuable asset.

The African Finfoot is endangered because of river pollution.

The Bateleur is one of the raptors in danger of becoming extinct.

One of the main problems for the African Ground Hornbill, which used to be abundant in the Zambezi region, is road kill (resulting from driving too fast) and habitat destruction. Unfortunately the good and well-kept tar roads in the north lend themselves to fast driving and the subsequent killing of this species. If you wonder why I visit the Zambezi region so often, the reason is that I am trying to save as many of these wonderful bird species as possible from extinction. Climate change has also had a big effect on the Black Stork population with the decrease in ephemeral rivers and flow disruption in perennial rivers.

Another real threat for birds, especially the bigger species like Ludwig’s and Kori Bustards is collisions into fences, windfarms and powerlines which, in addition, can cause electrocution. Luckily fences and windfarms are not that common (yet) in Namibia. How wonderful it would be if we could live in a world without any fences and powerlines (another pipe dream…).

Deep sea birds like the Cape Gannet, Wandering Albatross, Tristan Albatross, Black-browed Albatross, Atlantic Yellow-nosed Albatross, Northern Giant Petrel, White-chinned Petrel, Spectacled Petrel and Sooty Shearwater are all threatened by long-line and net fishing. I have always assumed that it’s  the fishermen who cause problems and I secretly hope that they will also become an endangered species – the fishermen, not the birds.

The main threat to shore birds are pesticides, lack of food (fishermen again), oil pollution (petrol joggies), getting entangled in debris (fishermen again) and environment fluctuation (fishermen again). Birds most affected are cormorants (Crowned, Bank and Cape). Greater and lesser Flamingoes and Great White Pelicans are all in danger because of low breeding success, pesticides, powerlines and disturbance by aircrafts. Human disturbance, especially by bird watchers or, more specifically, photographers does not pose a huge problem. The breeding areas of Caspian and Damara Terns are under threat from vehicles (quadbikes, and 4x4s) driven by enthusiasts/hooligans. 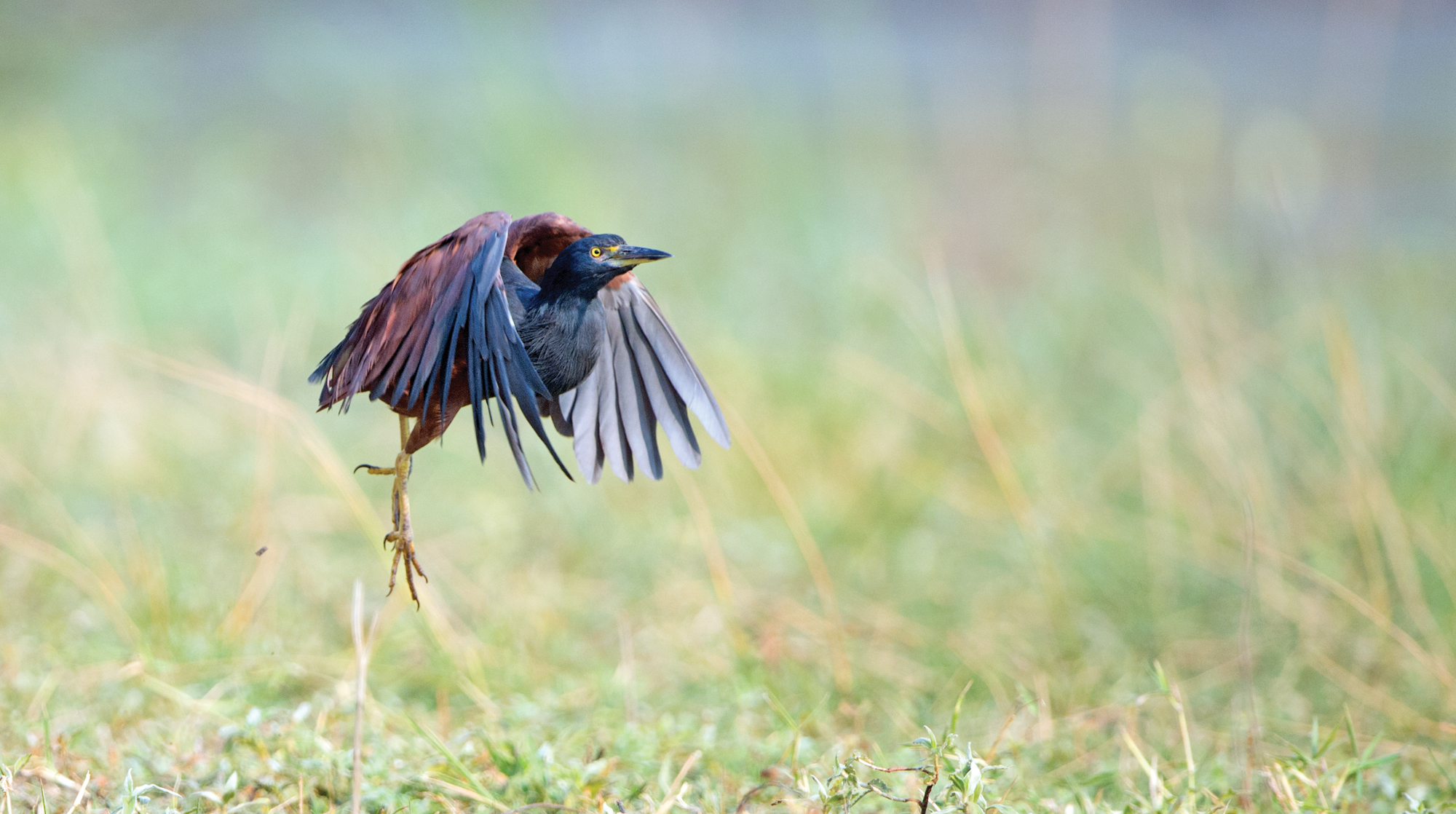 Rufous-bellied Heron taking off, but hopefully not leaving forever.

Although there is a definitive decline in the numbers of raptors it is rather surprising that so few of them are actually threatened, especially the Booted Eagle and the Black Harrier. In my opinion they have already been extinct for a long time, because I have been searching for them for the past 20 years without any luck. Raptors that are also observed relatively often but remain on the endangered list are Martial Eagles and Tawny Eagles, although it is easy to confuse the two species.

Two of Namibia’s endemics which are also under threat are the Damara Tern and the Violet Wood-hoopoe hybridation with the Green Wood-hoopoe). At least this is not the fault of human intervention. The Cinderella Waxbill which is my personal dodo, might already be extinct as far as I am concerned. However, local movement around the Kunene River makes them rather elusive and difficult to find: perhaps ‘endangered’ and ‘difficult to find’ are not the same thing.

Our African Penguins, which are found only at Lüderitz and surrounding islands, remain a major conservation challenge, especially on account of the threat of oil pollution. Unfortunately this threat seems to be on the increase, only to be removed if all the penguins migrate to the Antarctic or remain in Sandra Dantu’s backyard. However, this will not be a safe haven either because space might become a problem.

So are we heading for disaster? Only time will tell.

A Slaty Egret looking for survival.

This article was first published in the Travel News Namibia Summer 16/17 issue.