Hidden beneath the gnarled and twisted shapes of tree roots is the entire Noah’s Ark of African wildlife that roams the continent.

But it takes the special, skilled eyes of a talented woodcarver to recognise the shapes of the animals hidden within the wood, and to be able to release them for the world to see. Four such carvers currently ply their craft for Tikoloshe Afrika, the brainchild of Paul Goldbach.

Paul says he first caught a whiff of the idea when he visited South America a few decades ago. But it was his move to Africa and meeting Paulo Cashinga on a farm near Tsumeb in about 1990 that cemented the concept and gave it momentum.

Paulo, who hails from the Kavango, where woodcarving is a tradition that has been passed down from generation to generation, had carved a springbok from a piece of wood he had found on the farm. Paul was impressed and suggested they start a business together, selling carvings made from tree roots. The thick, twisting wooden loops are suggestive of anything you can possibly imagine – it’s rather like watching clouds pass overhead while lying on grass.

Six months after they had taken off, with Paul managing the business end of the enterprise and Paulo carving the wood, a sculpture Paolo had made was awarded a prize in a national art competition.

This recognition was the impetus they needed to expand on the idea, now filled with confidence that they were on to something big. “We knew then that we weren’t completely mad.”

Paul says without Paulo, Tikoloshe Afrika would never have come into being. “He built it up with me. Without him it would not have amounted to anything.” Sadly, Paulo passed away in 2012.

Since establishing the enterprise in the 1990s, Tikoloshe Afrika has become renowned for the array of wildlife that is cleverly carved from a diversity of roots, hailing from many different trees. Tikoloshe Afrika soon rented a stall at the Namibia Craft Centre to display and sell their singular form of art. It has since become one of the most long-standing stalls there to date.

Paul adds that each carver leaves his own unique carving fingerprint, and that it is possible to identify who has carved what by simply looking at the end product. “They all have their own unique style.”

Currently, most of the roots come from mopane or ironwood trees. Paul says that when sourcing wood, it is important to consider the colours and the thickness of the wood.

Ultimately, all the woodcarvings are exclusive. “Every one is different, because no two roots are the same.” Each piece of wood compels the carver to create a totally unique carving, setting a wild animal in a pose not seen before. 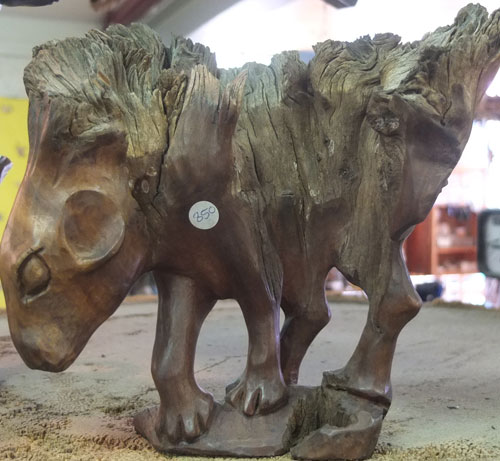 “Nature dictates what we do. And nothing is better than nature,” is what Paul tells the carvers, reminding them to gently unveil the wild animal crouching within the wood.