Take a Walk through Windhoek

Walking is one of the absolute best ways to get acquainted with any capital, so get those strolling shoes on and hit our city of Windhoek!

This leisurely circular route starts and ends in Robert Mugabe Avenue at one of the city’s most striking landmarks, the Christuskirche or Evangelical Lutheran Church, built from local sandstone and completed in 1910. Its design was influenced by Romanesque, neo-Gothic and Art Nouveau styles, and its stained-glass windows were donated by Kaiser Wilhelm II.

To its right, up on a rise, stands the golden Independence Museum dedicated to the Namibian liberation struggle. Neighbouring it is the Alte Feste (old fort), built in the early 1890s to protect the new settlers in Windhoek and provide accommodation for members of the Schutztruppe.

Opposite, in the historical Emma Hoogenhout building, are the administrative headquarters of the National Museum of Namibia. While further south along Robert Mugabe Avenue, on the right, is the Office of the Ombudsman, built in 1906 as a residence for senior government officials and converted into offices following independence.

When you reach the crossing at Robert Mugabe and Sam Nujoma avenues, either take a left to visit the City of Windhoek Museum and the National Botanical Garden further up in Orban Street; or take a sharp right and at the first traffic light, do a quick detour to the right into Rev. Michael-Scott Street. Notice the Supreme-Court building, the only development after independence that reflects an African, albeit northern African, style of architecture.

Head back to Sam Nujoma Avenue and proceed down to Independence Avenue. On your left in front of the Municipality Building is the statue of Curt von Francois, commander of a small force of Schutztruppe, who established the Alte Feste as his headquarters in Windhoek in 1889, and who is regarded by some historians as the city’s founder.

Go one more block further down and turn left into Tal Street, where you will find the Namibia Craft Centre in the Old Breweries Building. The best example of handiwork by Namibia’s craftspeople can be viewed and purchased here, and the Craft Café offers tasty refreshments.

On the corner of Tal Street and Sam Nujoma Avenue, is the Warehouse Theatre, a popular venue for live music, food feasts and all kinds of urban entertainment.

From here return to Independence Avenue and stop by the informal craft sellers who flank the right side of our main artery – trading in handmade goods from all across the country.

Meander northwards until you reach the Gustav Voigts Centre. Built in the early seventies, it offers a great deal more than convenience stores and banking facilities, such as outlets for hand-crafted jewellery, Swakara garments, camping and safari gear, curios and hand-made souvenirs, maps and books and other utility stores. It is flanked by the Carl List Mall, also a great place for shopping or a cup of coffee.

From the mall, cross Independence Avenue at the first set of traffic lights, then cross Fidel Castro Street to Zoo Park. Here you will see a curious two-metre-high stone column sculpted by well-known Namibian artist, Dörte Berner. (The monument marks the place where the remains of elephant bones were excavated in the fifties, now on display at the Earth Science Museum near Eros Airport.) Also in the park is the Witbooi Memorial, unveiled in 1897 to commemorate the lives of soldiers lost in battles fought between Schutztruppe and the legendary Nama chief, Hendrik Witbooi. Zoo Park plays host to the annual /Ae//Gams Cultural Festival that livens up the city for a full week in August/September, with cultural performances, music, stalls displaying handmade traditional arts and crafts, and foods from all cultures across the country.

When you reach the complex of concrete fountains, cross Independence Avenue for a short detour down Post Street Mall. Completed shortly after independence, the Mall has a large number of shops and boutiques and is another favoured venue for street vendors selling rural art, African-style clothing, curios and jewellery. Town Square, an addition to the Mall, offers more dining and shopping opportunities.

Developed around one of Windhoek’s oldest hotels and accessible from the Mall is the genial Kaiser-krone Centre with its palm trees, beer garden and restaurant with seating outside.

Mounted on steel columns and adding special interest to the Mall is the Gibeon Meteorite Fountain, where 31 of the original 77 Gibeon meteorites are displayed. The Gibeon meteorite shower occurred in southern Namibia south-east of Gibeon, and is the largest known shower of its kind in the world. The explorer, Sir James Alexander, recorded the occurrence of the fragments in 1838. For many years local Namas hammered the pieces into implements. 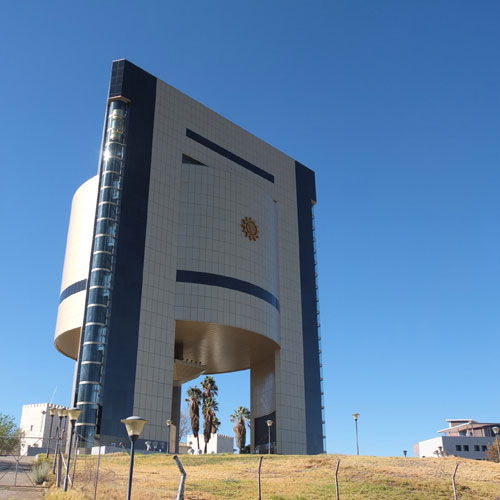 Return to Independence Avenue, cross to the Main Post Office, turn right into Daniel Munamava Street and then left into Lüderitz Street, proceeding down the hill until it runs into Independence Avenue again. On your right you will pass the Public Library, then the Magistrate’s Court and, on the corner with John Meinert Street, the Old Supreme Court. The bronze kudu mounted on a high stone plinth on the corner to your left is a landmark often used by locals when giving directions. The sculpture, which was sponsored by Ernst Behnsen and is the work of Professor Fritz Behnsen of Munich, was unveiled in the early 1960s to commemorate a period when rinderpest struck Namibia’s kudu populations and nearly wiped them out.

From here you turn right into Independence Avenue, cross at the traffic lights, and at the next set of lights, veer left into Bahnhof Street. At the bottom of Bahnhof Street on the right is the historical Windhoek Railway Station, built in 1912/1913. In front of the building is the narrow-gauge locomotive, vintage 1900, which used to work the old line between Swakopmund and Windhoek, and on the first floor is the TransNamib Railway Museum. The Remembrance Garden (affectionately known as Palm Tree Park, for obvious reasons) is situated on an island across the street and is a favoured place for the very popular World Music Day that annually takes place in June.

Double back up Bahnhof Street, cross Independence Avenue and proceed eastwards until you reach Robert Mugabe Avenue, having taken note of the Turnhalle Building on the right-hand corner. The Turnhalle (Gymnasium) was where the Turnhalle Conference (Constitutional Conference of SWA/Namibia) had its first session in 1975. In 2003 the main section of this historical building was renovated to house the SADC Tribunal.

On the opposite corner is the Franco-Namibian Cultural Centre (FNCC) another great place to visit for art exhibitions, live music and a bite to eat. When you proceed southwards down Robert Mugabe to where it crosses John Meinert Street, you will find the National Art Gallery of Namibia, featuring historical and contemporary Namibian art. In the gallery shop are Namibian and other African crafts for sale, and at the back, the Sculpture Garden and Garlic & Flowers Restaurant. Next door is the National Theatre of Namibia, and opposite the Namibia Scientific Society, where a wide selection of authoritative publications on the country published by the Society can be purchased.

Further south along Robert Mugabe Avenue, on your right, you will find the Owela Museum. Owela is the name of a traditional African game played with pebbles, of which there is an example in front of the building. The museum houses cultural displays and dioramas.

Up the hill on Robert Mugabe (on the right) is the former State House, a renovated version of the original house occupied by the former South West African administrators.

At the top is the Christuskirche from where you started, and to its east is the famous Tintenpalast, meaning Ink Palace. This is Namibia’s original Government Building, completed in 1914 in time for the first session of the Landesrat. It houses the current Namibian Parliament.

In front of the Tintenpalast is the Parliament Gardens, a great place for ending the walk with a picnic under century-old trees – prominent starting point in view to round off your introduction to Windhoek!