Windhoek Int. Airport back in business

At first light, a wispy mist rose above the Okavango River. Birdsong began to fill the morning in joyful bursts as shafts of golden sunlight warmed the day. I heard footsteps outside as hot coffee was delivered to my veranda. Hmm… I could feel a good Kavango day dawning.

Along the Okavango river. ©Ron Swilling

The delicious excitement of river time roused me from my cotton-wool dreams and I padded outside to collect the flask of steaming coffee. The promise of the day lay ahead with enticing afternoon possibilities of lazing on the water’s edge watching waterbirds skim the river surface and local fishermen row out in their mukoros (dugout canoes), and of cruising along the river in the Hakusembe River Queen as the red sun dipped into the trees. My plans for the morning were just as appealing and included a short and leisurely stroll to the Mbunza Living Museum to meet the people of the Kavango.

This ‘museum’ is nothing like the museums of old that display ancient memories in their corners like cobwebs. The ‘living museums’ are outdoor celebrations of culture: an ingenious concept initiated by the Living Culture Foundation Namibia (LCFN) to preserve traditional cultures of Namibia that are fast disappearing as people embrace the 21st century.

I was enchanted by the light-spirited Bushmen at the Ju/’Hoansi-San Living Museum near Grashoek, amazed at the Mafwe twirling their reed skirts with vigour and a good deal of sensuality in their grove of baobabs in the Caprivi, and had watched the Damara remembering their ancient culture against the backdrop of imposing granite boulders near Twyfelfontein. It was now time to meet the Mbunza, one of the five Kavango groups. 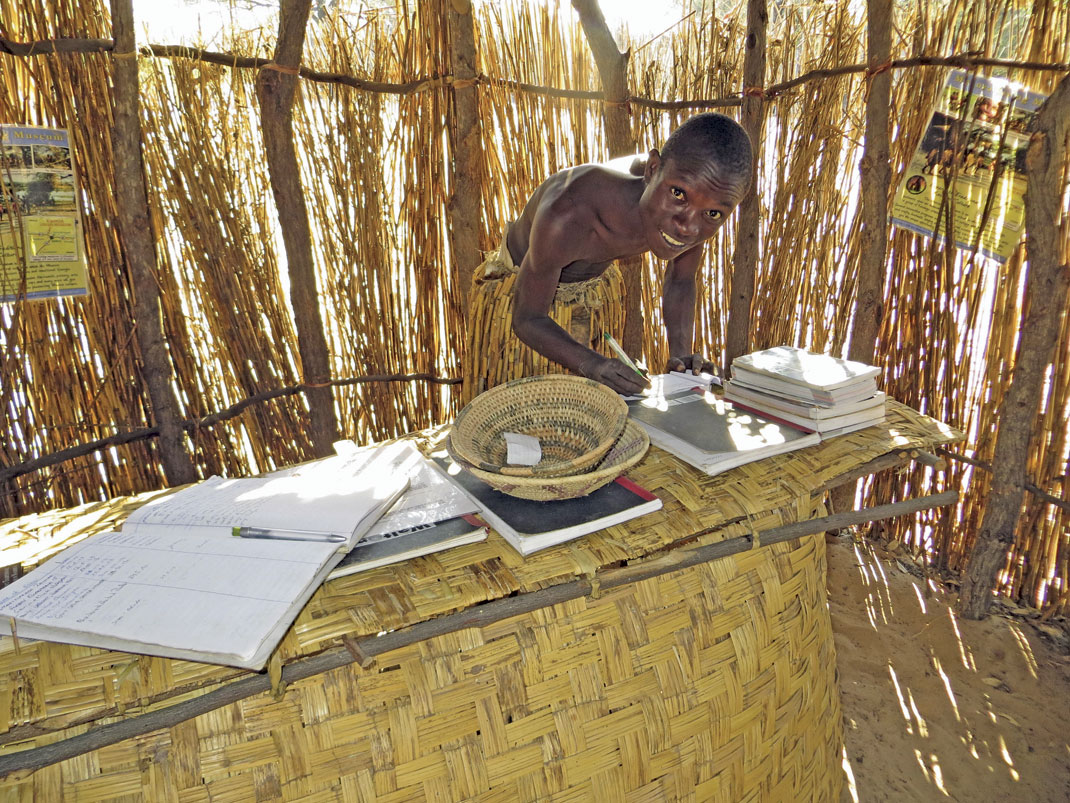 After receiving directions from the receptionist at the lodge, which involved walking down the sandy track past the water-lily pond and then veering to the left through the fields, I wandered off clutching a bottle of water and my camera.

Grey louries kwêeeeeed to me from treetops as I passed, water lilies bobbed in the ponds, flaunting their radiant beauty, and the bleached grass shone like melted butter against the blue sky. On reaching what I thought was a deserted lapa area, I stuck my head into a reed hut and was admiring the neat office with books laid out perfectly on the counter when Sebron Ruben appeared.

He beamed the broadest smile I had seen for a while. The Mbunza group continued to delight, educate and entertain me with everything they could possibly show me from their culture, with such grace and authentic friendliness that I was instantly absorbed into their world.

Situated on the banks of Lake Samsitu, the ‘place covered with big trees’, the living museum began in spirit in 2009 when Werner Pfeifer and Sebastian Dürrschmidt from LCFN visited the Samsitu campsite and introduced the concept to the community. It took two years of meetings and discussions, drafting a proposal for the project, approaching Chief Alfonsi Kaundu, and applying for the land before they could open their ‘doors’ to visitors. Grass and river reeds had been collected from the surroundings in true Kavango fashion for the construction of the living museum.

Sebron, a member of the group comprising five men and six women, welcomed me in and acted as translator and guide, continually flashing his white teeth in a wide smile.

I was led from person to person, each revealing another part of the Mbunza culture. The women wore wigs made from Sansevieria (Mother-in-law’s tongue) twine and Terminalia roots, the customary headdress for married women, and both men and women wore modest skin wraps in traditional style.

Each demonstration was given while Sebron filled in the gaps with fascinating anecdotes about the culture. As I watched a man fashion a tiny cow out of river clay, he informed me that they made good gifts to give to a chief if he punishes you or, if your wedding is imminent, to your future in-laws. Someone else carved a small canoe as they would the larger dugout canoes or mukoros used on the river. Women wove baskets from makalani palms, a craft passed down from mother to daughter.

This is an important skill, Sebron informed me, not only to make vessels for carrying, for use as plates and for separating grain from chaff, but necessary to prove your worth to your mother-in-law.

If you didn’t know the craft, she was entitled to return you to your parents! It was just as important for a man to know how to make a mat, this being a man’s work, so he could make the first mat that he would share with his future wife.

I carried on walking around the reed-lined enclosure, pausing to watch someone play the finger piano (played when people gather around a fire or when there’s a feast or ceremony), the mouth-bow (to attract antelope) and the drums (for dancing).

Food was next, and a favourite drink amongst the older people – sour milk. “Souring the milk is work for the father and not the children who drink it up before it’s done,” Sebron informed me.

He offered many more amusing snippets of information as I tasted steaming-hot mangetti fruit and watched a woman pound grain, a reed skirt being made (which can take two to three months if you’re lazy!) and an African board game played in the sand, an important test of intelligence when a chief is vetting potential suitors for his daughter. 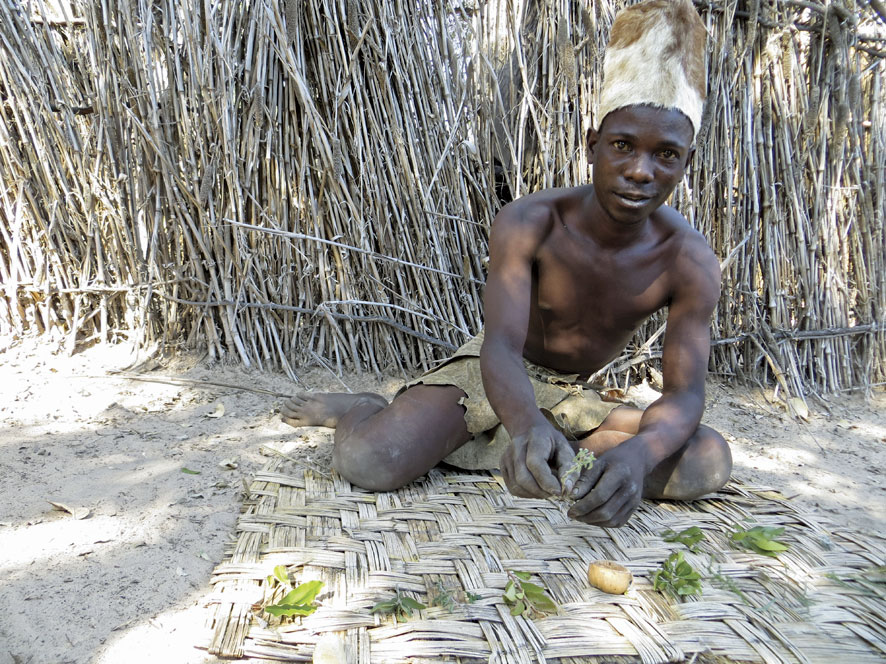 I was trying to keep up with walking, taking photographs, watching the demonstrations and scrawling notes. I eventually had to abandon my notes when I was taken for a lesson on medicinal plants that were laid out neatly and brightly on a mat. By the time we reached the Aquafresh and Colgate toothpaste trees, I acknowledged the fact that there was too much to record in such a short visit. There was a wealth of information here. I realised the value of it and the importance of preserving it for future generations. And the living museums are doing just that.

The women laughed as they fished with traditional woven traps, and the men smiled as they practised blacksmithing skills that had nearly been lost to time. My visit was drawing to a close and I was chock-full with Kavango kindness.

The final part of the visit was entertainment. The energy of the dance and the spirit of the songs culminated in the finale, with the women ululating to a crescendo as they wished me well on my way. The drumbeats paused and the still and hot Kavango day took over again.

I stumbled to a hut to purchase some expertly made baskets, bade my farewells and walked back past the butter-coloured fields and the lily ponds to the lodge and the glistening stretch of river. The water lapped softly against the shore as I contemplated this rich culture on the banks of the Okavango River.

Five living museums have been established to date (with plans of more for the future) where cultural groups don their traditional gear and introduce visitors to their traditions. The activities can include bush walks, crafts, stamping grain, preparing food, song and dance, weaving mats and even hunting.

The museums include the Living Museum of the Mbunza near Rundu, the Ju/’Hoansi-San (Bushmen) in Grashoek near Grootfontein, the Mafwe near Kongola in the Caprivi, the Hunter’s Museum on the outskirts of Tsumkwe, and the Damara Museum en route to Twyfelfontein. Each living museum is run by the group themselves, not only reinforcing traditional values and keeping their culture alive, but also bringing in revenue in areas where there is scant chance of employment.

If travelling northwards to Rundu, take the B10 turnoff (towards Nkurenkuru) before reaching the town. After approximately 10 km, look out for the signboards to the museum (on the same road as Hakusembe River Lodge and Samsitu Riverside Camp).

Booking is not essential but recommended. Phone ahead to contact manager Sebron Ruben at +264 (0)81 215 2496, book via email at contact@lcfn.info, or just take a stroll down the sandy road.