From the icy waters of the Atlantic to the swamps of the Caprivi, shimmering white fortresses to extraordinary plants, the sweeping landscapes, magnificent game viewing and […]
Do you like it?
0 Read more

By Marita van Rooyen South Africa has Table Mountain, Botswana has vast numbers of wildlife, Zimbabwe has Vic Falls, Angola has diamonds and Zambia has the […]
Do you like it?
0 Read more

I’m finding it difficult to write a campsite journal this month. Not because we’ve already explored all of Namibia’s campsites, but because it’s impossible to be […]
Do you like it?
0 Read more

This land has an endless supply of contrasts. Travel News Namibia’s team member Elzanne Erasmus recently discovered this first hand. She embarked on an expedition to visit each accommodation establishment in the Naturally Namibia family, all in one week!
Do you like it?
0 Read more

The memory of places

A short history of some amazing Namibian locations, now managed by Namibia Wildlife Resorts
Do you like it?
0 Read more

Take a look at the 4 establishments that together make up Big Sky Lodges, a part of the Naturally Namibia group
Do you like it?
0 Read more

A stunning location like Namibia is bound to have its fair share of isolated spots with which to tempt the starry-eyed newlyweds. That is why we've compiled a short list of the ten most romantic places in Namibia for royally in love couples to spend their honeymoons.
Do you like it?
2 Read more

During a drive down to Windhoek, Nina van Schalkwyk stopped in the dusty little town of Kamanjab, where she was charmed by its surprising creativity, cheerful inhabitants and a sheep that can’t keep its pants on.
Do you like it?
0 Read more

The camping bug bites the most respectable members of our community. Deputy Judge President Hosea Angula started exploring Namibia with fellow supreme court judge Dave Smuts and the late photographer Tony Figueira in the early 80’s. And even though work seems to be getting in the way of his hobby, we do believe that once a camper, always a camper. Here Judge Angula shares his thoughts on the best camping cars, scaling the Brandberg and why you should never leave your shoes outside the tent.
Do you like it?
0 Read more

Riemvasmakers: The Peaceful Simplicity of Life

Despite the way the Riemvasmakers found their way to Namibia, the small community thrives in the arid region west of Khoixas. Some live at Bergsig, some at Vrede, and some, like Bassons at De Riet, a small cluster of informal structures close to the Aba-Huab River. With little fencing to protect themselves or their livestock, the pre-fab church destroyed by a heavy rainstorm last year, they don't have much. But what they have been able to hold on to through all the disruption caused by the relocation, and years of living in harsh conditions is a sense of self and culture, as well as their beautiful Afrikaans mother tongue vocabulary that sets them apart from many cultural groups in the area.
Do you like it?
0 Read more

The White Lady – neither a lady, nor white

The Brandberg is an open-air art gallery with more than 43 000 individual rock paintings. But it was a single painting that made the mountain famous and kindled a myth that refused to die for many decades. Willie Olivier recently followed in the footsteps of the man who discovered the famous painting to tell the 100-year old story and take fresh photographs.
Do you like it?
0 Read more

Fuelled by Passion – The RMB Namibia Ride for Rhinos

What does it take to save the rhino? The list is long - tracking teams, vehicles, food, uniforms, binoculars, support staff and supporters, among many other things. But the most essential element needed to save the rhino is passion.
Do you like it?
0 Read more

Find the Authenticity of Nature at Etendeka

Namibia is a country for the wide angle. The far horizons. The distant, sparse beauty of line, shadows and colours in an everchanging landscape.
Do you like it?
1 Read more 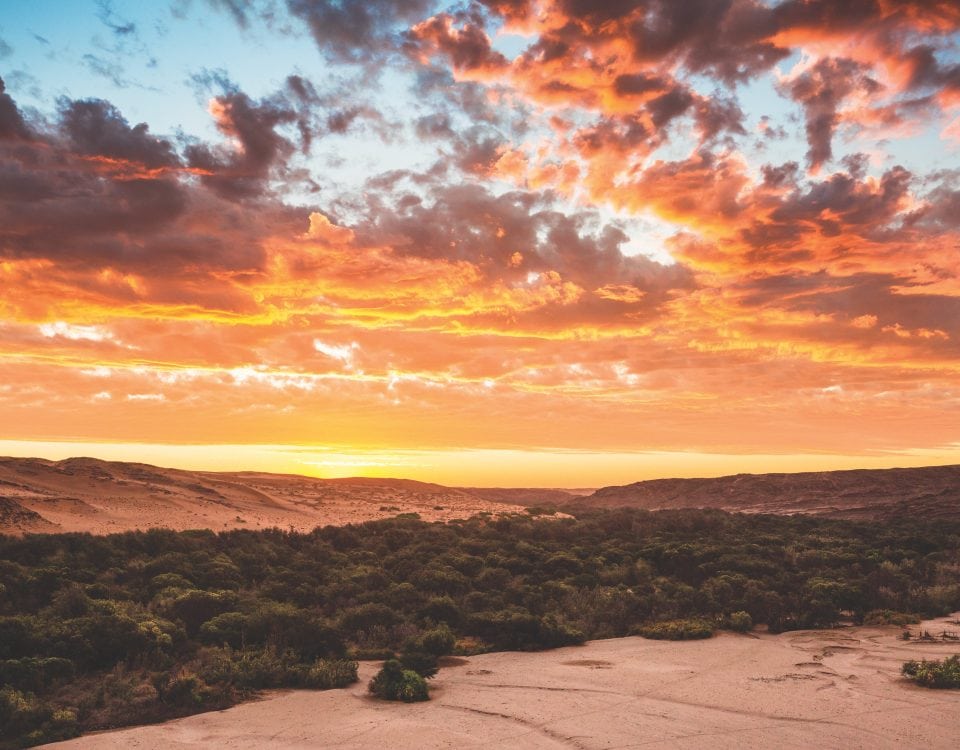 Salvadora and the Strange Oasis

Salvadora persica, which goes by many common names such as miswak and arak in Arabia, or the mustard bush or toothbrush tree because its twigs can be used as a natural toothbrush.
Do you like it?
0 Read more

Elzanne Erasmus recently sat down with Asser Ndjitezeua, the Chairman of the ≠Khoadi-//Hôas Conservancy in Namibia’s Kunene Region, to talk about the conservancy model, the benefits of tourism for communities and the big dreams that have come true for locals in the region, an area often referred to as Damaraland.
Do you like it?
0 Read more

All over the world visitors are attracted to the obvious must-sees. To those images which catch the eye on a TV screen, in a travel magazine or on a billboard. Images are the most powerful tool in tourism and luckily, Namibia is one of the most photogenic destinations. There are so many places in our country begging one to come closer, look deeper and become part of the picture.
Do you like it?
0 Read more

Namibia among the Top 100 in the world in sustainable tourism

Press Release – 21 December 2018   ≠KHOADI-//HÔAS RECEIVES GLOBAL FIRST SUSTAINABLE TOURISM AWARD FOR NAMIBIA In a global first for Namibia, ≠Khoadi-//Hôas Conservancy in the […]
Do you like it?
0 Read more

TNN’s Most Romantic Destinations in Namibia

Namibia is one of the most romantic countries on the continent, with a variety of places to set hearts alight, from the open spaces of the south, to the lush greenery of the northeast. So before you get absolutely overwhelmed with all things Valentine’s, take a look at our list of the most romantic destinations in Namibia every couple should visit this Valentine’s Day, or whenever!
Do you like it?
0 Read more

The 5 Most Romantic Experiences in Namibia

What makes a moment truly romantic? Is it about the atmosphere, the candles and the roses? Or the fact that it is you and your significant other spending time together? Does it have to be at a remarkable destination, or is it about the journey there? When it comes to romantic experiences, Namibia is full of them. Here we have listed the top five activities that are sure to send sparks flying.
Do you like it?
0 Read more

This is my Namibia – Gerhard Thirion

On a photographic safari in a remote part of north-western Namibia we encountered a black rhino bull browsing in a small riverbed. He was roughly 200 […]
Do you like it?
0 Read more
12
Next page